Chilling out in Cape Town II


Part I of the blog appears here: (link) 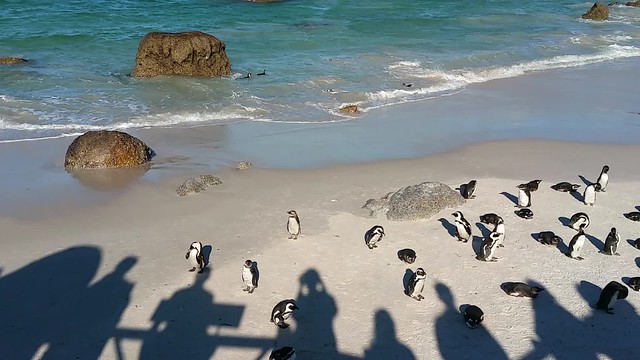 Located in the South of South Africa, Cape Town boasts of some amazing landscapes and diverse flora / fauna. 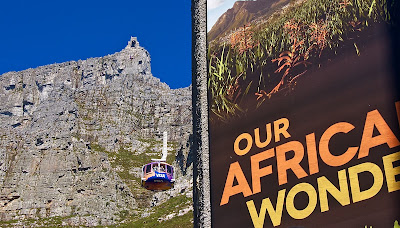 The name is self-explanatory and the uniqueness of the the mountains is that they are wide and (very) flat at the top - it is almost as if someone took a knife and cut out the pointed peaks. 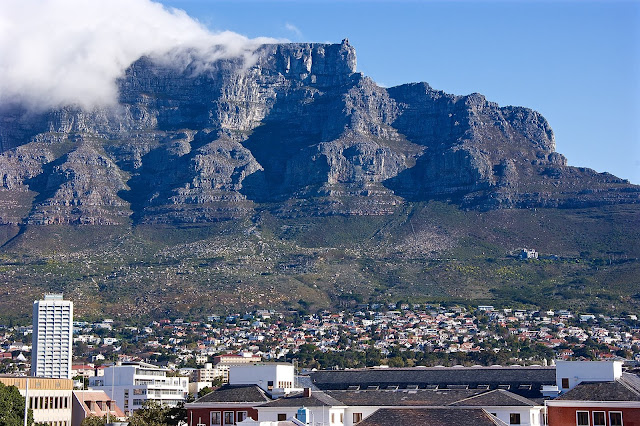 Exploring the Table Mountains is easy - there is a cable car which takes you to the top of the mountains. There are public buses, as well as the Cape Town Hop-on / Hop-off sightseeing bus, which can take you to the Cable car station. Note that the cable car gets quite crowded during peak touristic seasons, so we would recommend purchasing tickets in advance. You can also buy the tickets together with your Hop-on / Hop-off bus tickets. 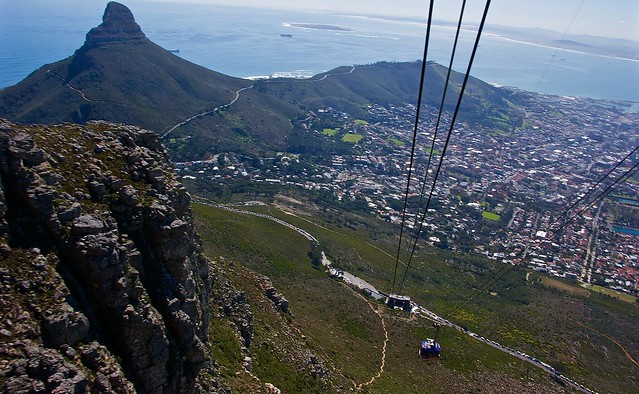 Once you reach the top of the Table Mountain, you can walk around and explore the reserve - there are cafes, toilets, and most importantly view points from where you can capture wonderful panoramas of Cape Town. 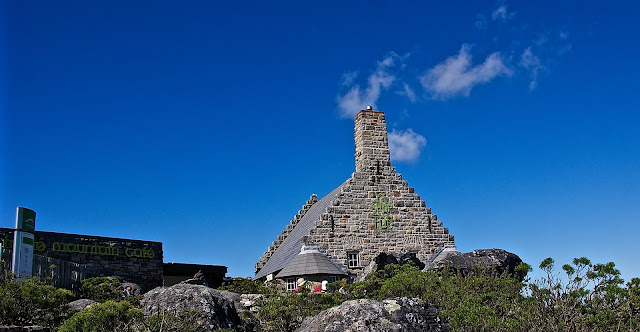 You can often spot these little ones (pic below) sitting at the peaks and staring at you. We believe that they are called Rock Hyrax aka Dassie. We also noticed groups / agencies providing (selling) bungee jumping experiences at the top - however it is clearly not meant for the faint of heart (like ours). 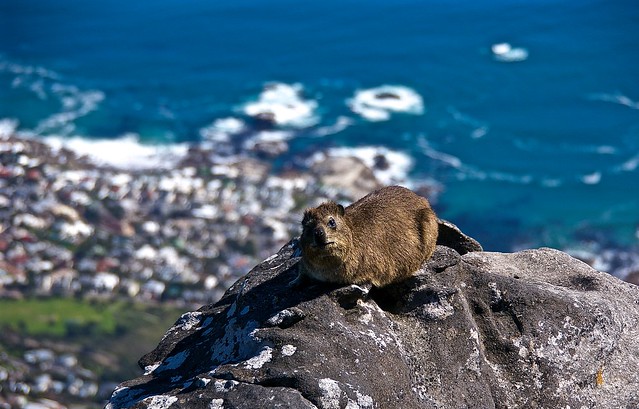 As we did not have much time, we booked a private "Cape of Good Hope, Cape Point, Penguin and Seal Colonies" - 9 hour trip with Cape Town Day Tours.

(TripAdvisor review: link)
The whole tour was well organized. We managed to see seals, penguins, Cape Point and the Cape of Good Hope - all without any rush and at a leisurely pace. We made many small stops along the way while driving along the Atlantic seaboard - the most significant among them being the 12 Apostles Peaks and Chapman’s Peak. 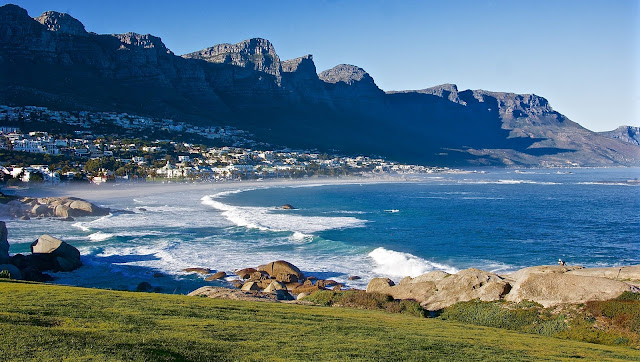 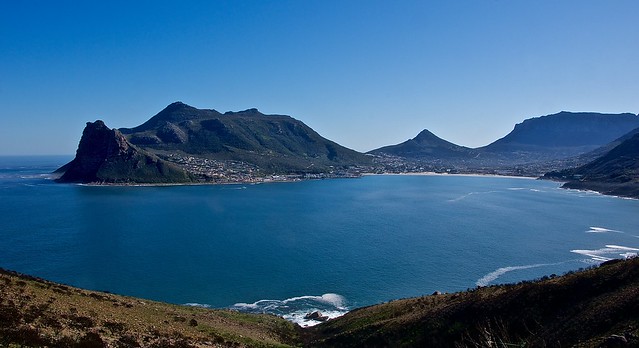 
Our first real stop was at Hout Bay - to take the ferry to Seals island.  Hout Bay itself is an amazingly beautiful village with mountains encapsulating the boats docked at the valley. 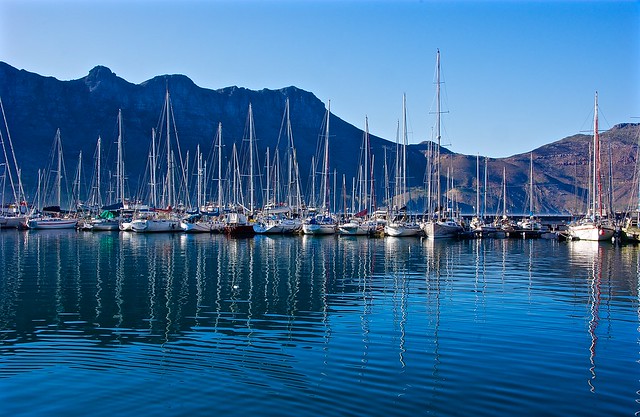 We then took a ferry which took about 20 minutes to reach Seals island. The island was amazing as well. We were expecting to see a tiny island where it would be difficult to even spot 1 or 2 seals. However, we were pleasantly surprised, and the island was teeming with seals. Although, we were not allowed to set foot on the island; the ferry approached quite close to the island providing us an up-close and personal viewing of the seals.

Once the ferry had sailed about 10 or so minutes from Hout Bay, you can start feeling the powerful (Atlantic) ocean waves; and the ferry seemed to rock quite a bit - so may be think twice before taking the ferry if you get seasick easily :) 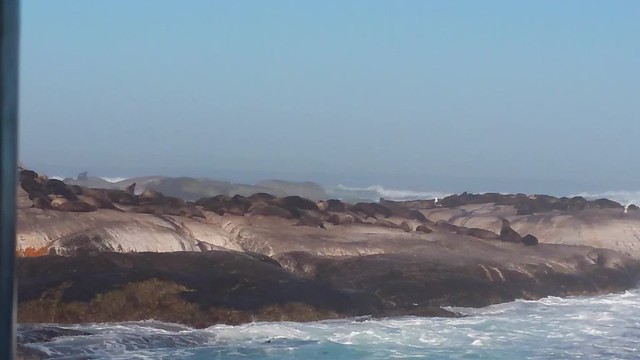 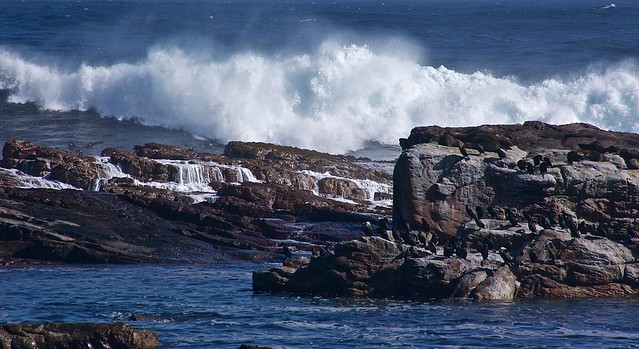 In the reserve, you can take the funicular to the lighthouse at the top; or simply walk around - there are photo opportunities at every corner. While it is said (rather advertised) that one can see the Atlantic and Indian oceans merging at Cape point; for all practical purposes, it is almost impossible to distinguish between the two oceans. (It is e.g. nothing like our Triveni Sangam where one can clearly distinguish the rivers by their water colors.) 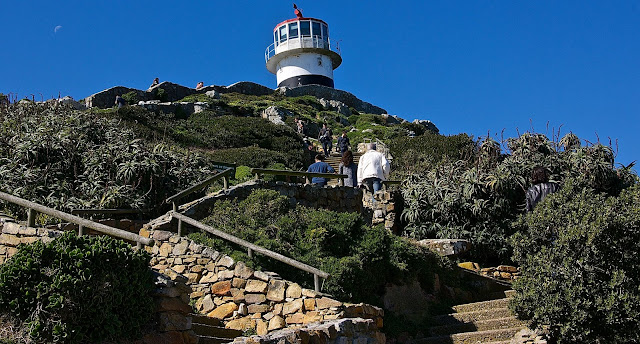 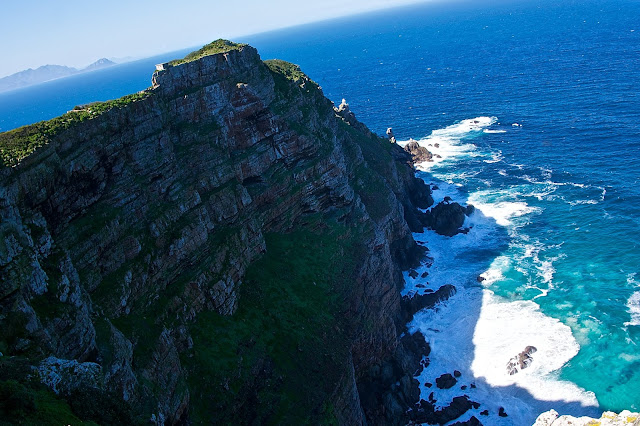 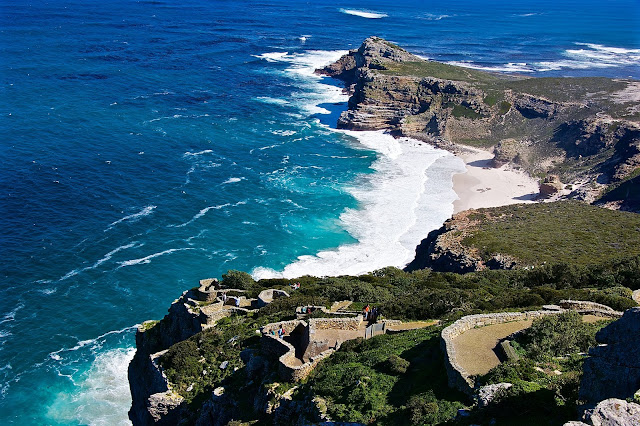 We also managed to track down a few animals in the Cape of Good Hope reserve, e.g. the bucks and ostriches below. 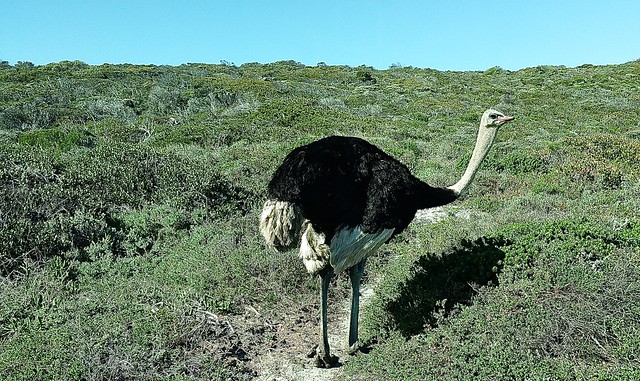 Last but not the least, do not forget to visit the Penguins colony at Boulder's Beach. Yes, Penguins, you heard it right!! It seems that popular media including films and TV shows have led us into believing that Penguins can only be found in very cold places e.g. Antarctica.

However, this is clearly not true; and we were pleasantly surprised to see a whole colony of Penguins in Cape Town. It is their natural habitat, and not a close facility like a zoo by any means - e.g. check out the 2 guys below walking on the main road. 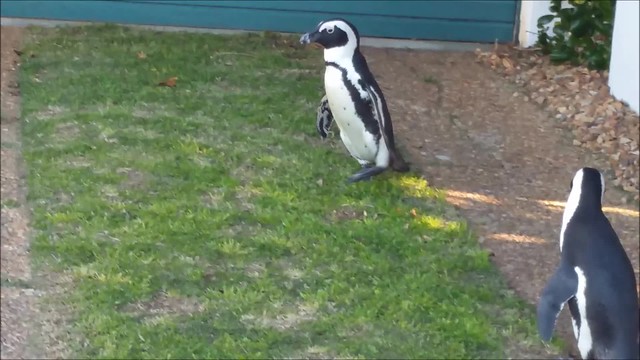 The area is not huge, probably can be covered by walking 15-20 minutes. But during that time, you can easily expect to spot around 100 penguins. There are penguins in whichever direction you look - and they are surely as cute as you'd expect them to be - if not more. 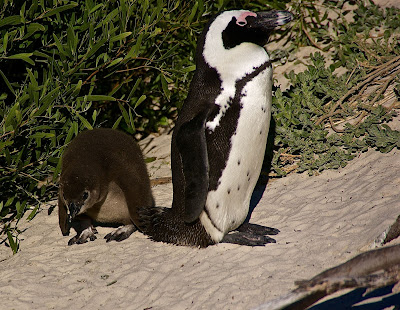 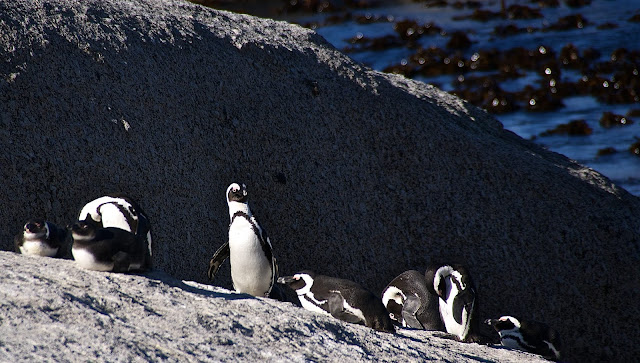 Chilling out in Cape Town

Continuing our South African trip, we traveled to Cape Town after visiting Kruger.


The plan was to travel from Kruger to Cape Town by the Blue Train.

The Blue Train is a luxury train operating between Pretoria and Cape Town. If you are a Agatha Christie fan, you might have read the "The Mystery of the Blue Train". It takes around 27 hours and is the perfect way to travel in luxury from North to the South of South Africa.

Unfortunately, as we learned later to our dismay, the rail network in South Africa is not really up to speed. There was a derailment on one of the tracks the night before our trip. As such, our trip was cancelled. So to our utter disappointment, we had to miss out on our eagerly anticipated Blue train experience. To the credit of the Blue Train organizers, they handled the cancellation exceptionally well - with full refund, arranging alternate transport to Cape Town, and providing accommodation for the night at Taj Cape Town. As we were waiting for them to make the alternate arrangements, the crew gave us a small tour of the Blue Train - some pics below: 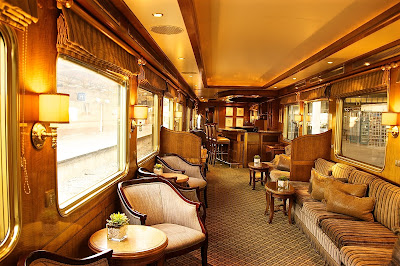 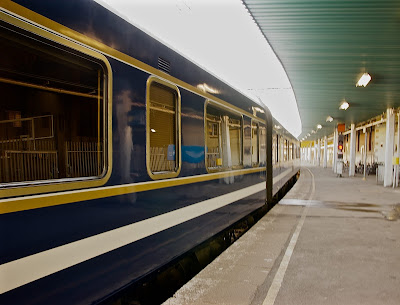 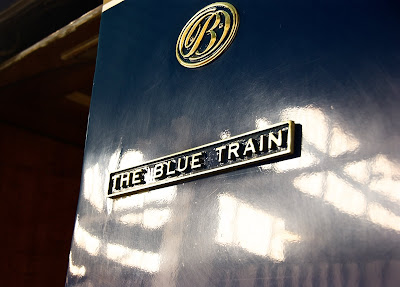 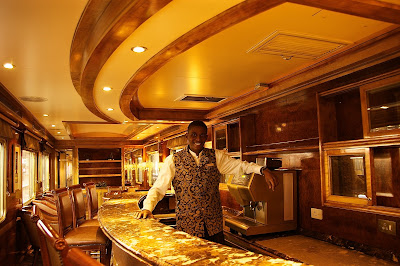 While the interiors (bars, lounges, rooms) were really gorgeous, the only thing we felt on the negative side - was the size of the rooms. The normal rooms seemed even smaller in reality than in the pictures. So think carefully about booking the luxury rooms - the extra ZAR 2000 may be worth it.

We had the pleasure of staying in 2 lovely hotels in Cape Town.


(Our Tripadvisor review: link) The Taj Cape Town is a luxury hotel located in central Cape Town. The staff is super friendly and helpful. It was quite crowded when we were checking in, and as our room was still not ready; the lady at the desk kindly upgraded us to a room with a view of the Table Mountain. And, what a view it was!! – check out the pics below :) 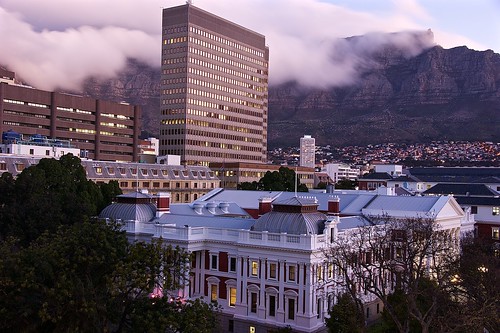 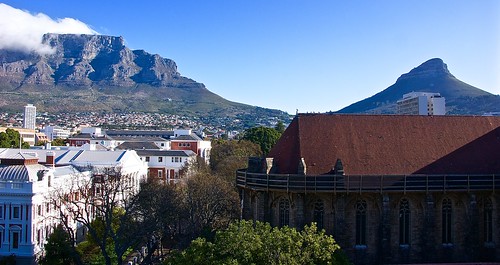 The rooms are spacious, tastefully decorated with expensive furniture. The breakfast selection was also excellent. We were really happy when we came to know that you can also order a Masala Dosa for breakfast. 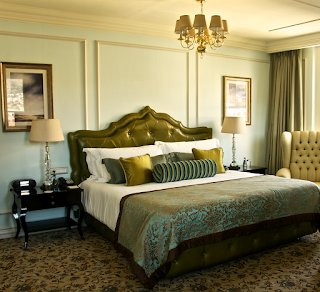 The only downside might be the location. The hotel is centrally located in the business district. So while it would be great for a business traveler, it is a bit far (4 kms) from the Waterfront where you would usually stay as a tourist.

(Our Tripadvisor review: link) While  staying at the Taj, we also had the pleasure to dine in its in-house Indian restaurant: Bombay Brasserie.

If it is Indian food you are looking for in a luxury setting, then this is the place to go. The restaurant is small, maybe for 25-30 people at a time; which means a nice, cosy, and romantic setting. It also means that it is usually fully booked, and that you need to reserve in advance. Even as hotel guests, we had to reserve in advance.

As Indians, we can vouch that the food quality was great. We really liked the small starters they kept serving in between the courses. The service was friendly and attentive. It is expensive, yes; but we did not find anything overpriced - it is the price you pay for fine dining. Overall, we had a very enjoyable experience and can really recommend it!

(Our Tripadvisor review: link) The search for ocean views and proximity to the Waterfront - took us to the Radisson Blu Waterfront. So "location" is really the key for this hotel.

While you can enjoy ocean views from the room or restaurant (the hotel is right on the Atlantic coast), the Waterfront is not exactly walking distance - but the hotel has a free shuttle departing every 30 minutes - takes about 5 minutes from the hotel to the waterfront. We stayed in a business room which had a balcony with wonderful views of the ocean. The view was definitely worth the additional expense of a business room. 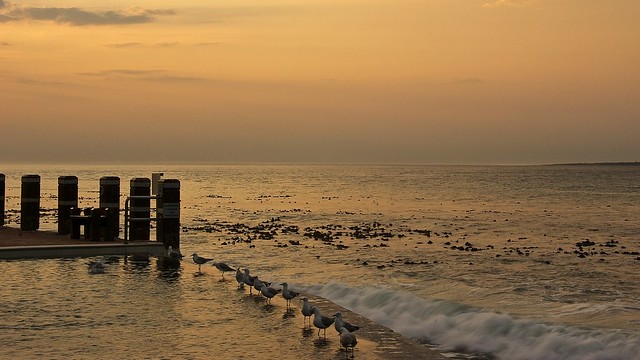 Hotel staff are very friendly and helpful. The room service menu can be improved - not many choices. However, the kitchen staff are flexible, so feel free to ask them if you are looking for a specific dish. The hotel interiors somehow do not give the impression of a luxury hotel. It is a bit difficult to express it in words; the hotel is modern and has all the necessary amenities of a comfortable stay, but somehow does not give the feeling of a grand luxury 5 star hotel.

Waterfront is kind of the "happening" place for tourists in Cape Town - the hub for shopping, nightlife, restaurants, etc. There are enough shops in the proximity to keep you occupied the whole day. Do not forget to check out something called the  Watershed - where you can find crafts, furniture, etc. from all around Africa. There also have some live workshops and fashion shows from time to time.

If it is Tanzanite jewellery you are looking for, we can recommend Uwe Koetter Jewellers - which is located inside the V&A Waterfront Arcade. They seemed to have a good collection and the prices seemed reasonable.

The usual "suspects" e.g. Louis Vuitton, Gucci, Armani ... are of course also there for your shopping pleasure. We did not find the prices any cheaper than say in Europe - however it might still be worth it as you can get a VAT refund for all purchases above ZAR 300. So be sure to collect / preserve the Tax receipts, and have the purchased goods ready for inspection at the airport. They have Tax Refund centers at both Cape Town and Johannesburg airports. 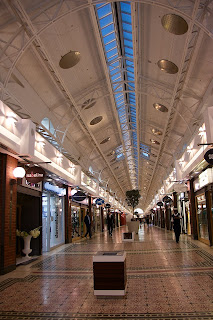 The whole place has a fun, picnic, family outing, kind of feel to it. There are numerous cafes and you can often enjoy live street performances from local artists in the evenings. 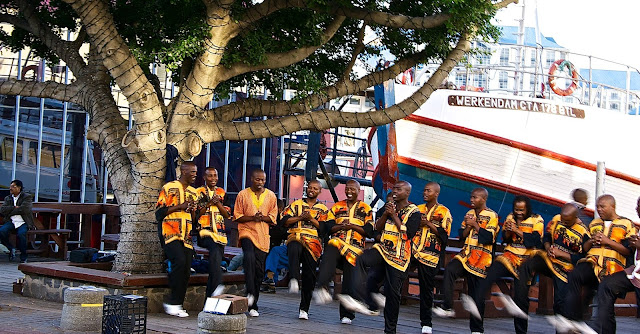 In part II of this blog, we will focus on the nature / activities in Cape Town: Table Mountain, Cape of Good Hope, Seals and Penguins Colonies.