Cappadocia, Turkey - the land of imagination

We visited Cappadocia during Easter 2014 for a couple of days.


The best way to reach there is to take a flight from Istanbul - takes an hour to Nevşehir and costs between 200-300 Turkish Lira. From Istanbul, you can take a flight to either Nevşehir or Kayseri - both are fine as tour companies usually provide shuttle service from both airports. The actual place that you want to visit is Göreme, which is closer to Nevşehir airport. And, you would mostly like be staying in hotel in the nearby town of Ürgüp. The other option would be to take a bus from Istanbul, but not only does it take a long time (10 to 12 hours), the number of English speaking people around is also very less - so we would not really recommend it unless you have a local friend.


Cappadocia, or rather Göreme is a UNESCO protected heritage site. As such, there are lots of things to see and do in Cappadocia. So we would really recommend booking a tour with a travel agency to make the most of your time. We booked the "Cappadocia in 2 days" tour with Hit-the-Road (HtR) travel agency. Based on our experience, we can definitely recommend HtR - the tour guides were excellent / very friendly - and everything was organized very nicely and in a timely fashion. The tour is basically a package tour combining their North and South Cappadocia tours, with a night stay at MDC Cave hotel in Ürgüp and airport transfer. 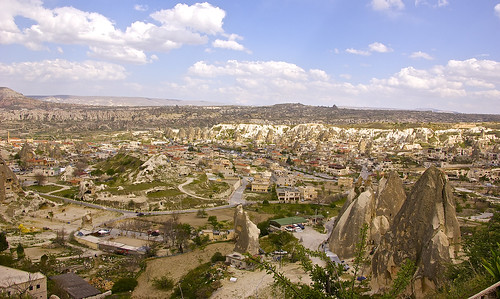 
Our first stop was Devrent Valley, aka "Imagination Valley". The surreal looking landscape is home to a variety of rock formations. You can let your imagination run free and imagine everything from animal to ghosts to celebrities, e.g. do you see the camel in the picture below?

Our next stop was the "Fairy Chimneys". Legend goes that fairies used to live in this place who helped humans fight their enemies. Later, when their problem was solved, humans turned on them and the fairies had to flee via the chimneys. The legend stems from the fact that only fairies could have creating something so surreal. Even we felt the same - it almost felt like you have reached the land of aliens. Rumor has it that this place also served as the inspiration for Sci-fi films like Star Wars. 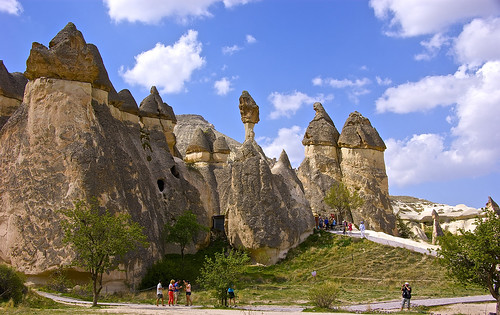 
Göreme Open Air Museum is another UNESCO protected heritage site with its impressive collection of rock formations, cave dwellings, and churches. The church paintings have mostly been destroyed, and hence they do not appear as impressive as for instance those found in Roman churches. The problem is that most of the churches here employed the "secco" style which implies painting directly on the walls - as compared to the more prevalent "fresco" style in Italian churches which are painted on plastered walls - as a result of which most of the wall paintings have been destroyed and the churches look dark and bare.

One thing that you definitely need to try out here is to take a hot air balloon ride. It is probably one of the few places in the world where you can take a balloon ride over an amazing landscape for 100 Euros per person (for 45 minutes). The problem is of course the weather which often plays spoilsport - as in our case as well - where they do not fly the balloons in case of strong winds. Still, check out the pic below and hope that you will be more lucky than us!

The first part of this tour is a 4 hour hike among the Red valley hills. The trail is not very well developed in that you will often be hiking over loose sand at quite high places without support - so ensure that you are wearing proper hiking shoes. However, the landscape including volcanic rock formations will more than make up for your troubles. 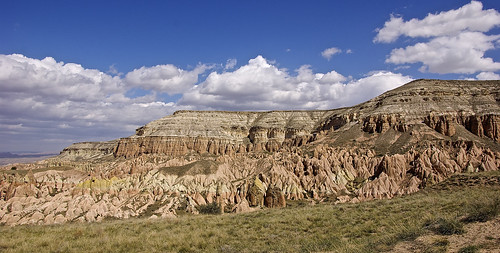 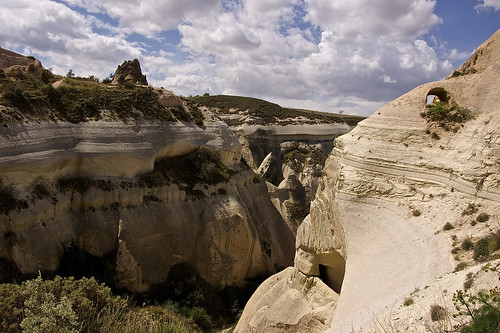 You will be able to take a break in a cafe high among the rocks. 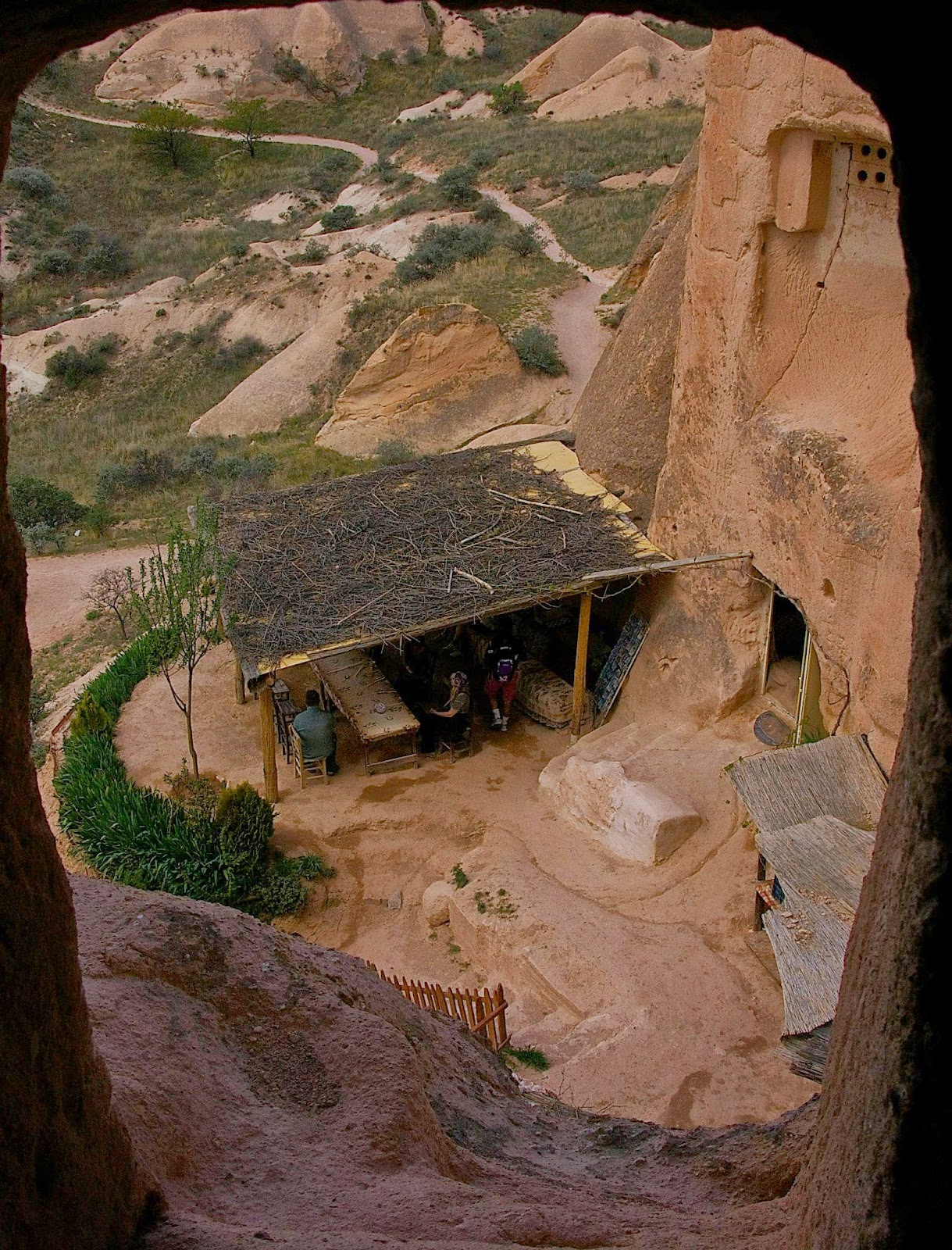 The hike ends at Cavusin Cave Village which houses the impressive rock castle below ... where people used to live till the 20th century. 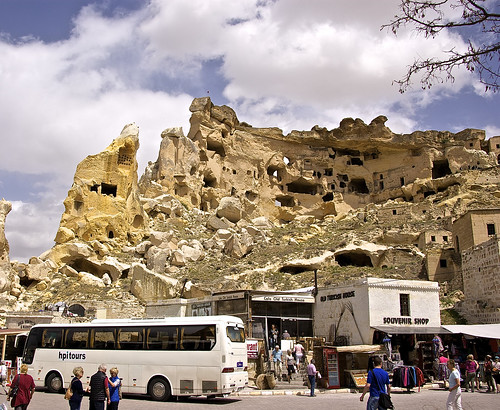 The final stop of the tour is the Underground City of Kaymakli. We were amazed to see the hardships endured by people during that period. People lived underground in absolutely dark / cold conditions for long periods - you can see their underground kitchen, stables, etc. and how they made the most of it even in those conditions. It also reminded us how lucky we are in that respect - to be thankful for what we have and not lament for things that we do not have :)

Just be careful that the tour consists of moving underground in very narrow tunnels for about 30 minutes - often crowded with tourists - so definitely not recommended for the claustrophobic ones among us.

The north tour consists of a stop at a pottery workshop where you can try your hand at making a pot the old style - by spinning the wheel with your legs. The workshop leads to a showroom where you can buy hand-made products - a bit on the expensive side though. 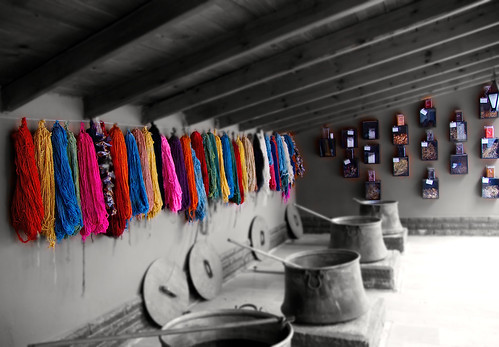 The other thing that is pervasive in Turkey is carpets. It does not matter where you are in Turkey,  you will always encounter someone trying to sell you a carpet. In the (golden) old days - men used to make pottery and women carpets - and neither could get married if they could not make pottery / carpets. The south tour does include a stop at a carpet showroom where you get practical information regarding the different types of carpets, and they also have an impressive collection of carpets to choose from - at a discounted price.

The good thing about both pottery and carpets is that they ship it worldwide at no extra cost, irrespective of the product cost. It seems that the Turkish government refunds the shipping cost to them at year end - seems like a scheme to encourage exports.


We learned that the government has recently lifted restrictions w.r.t. selling cave houses. As a result, many cave hotels have sprung up in the region. We stayed at the MDC Cave hotel in Ürgüp, and we can absolutely recommend it. From the friendly customer service to room sized bathrooms, the caves boast of all modern facilities, not to forget the absolutely stunning landscape at night. 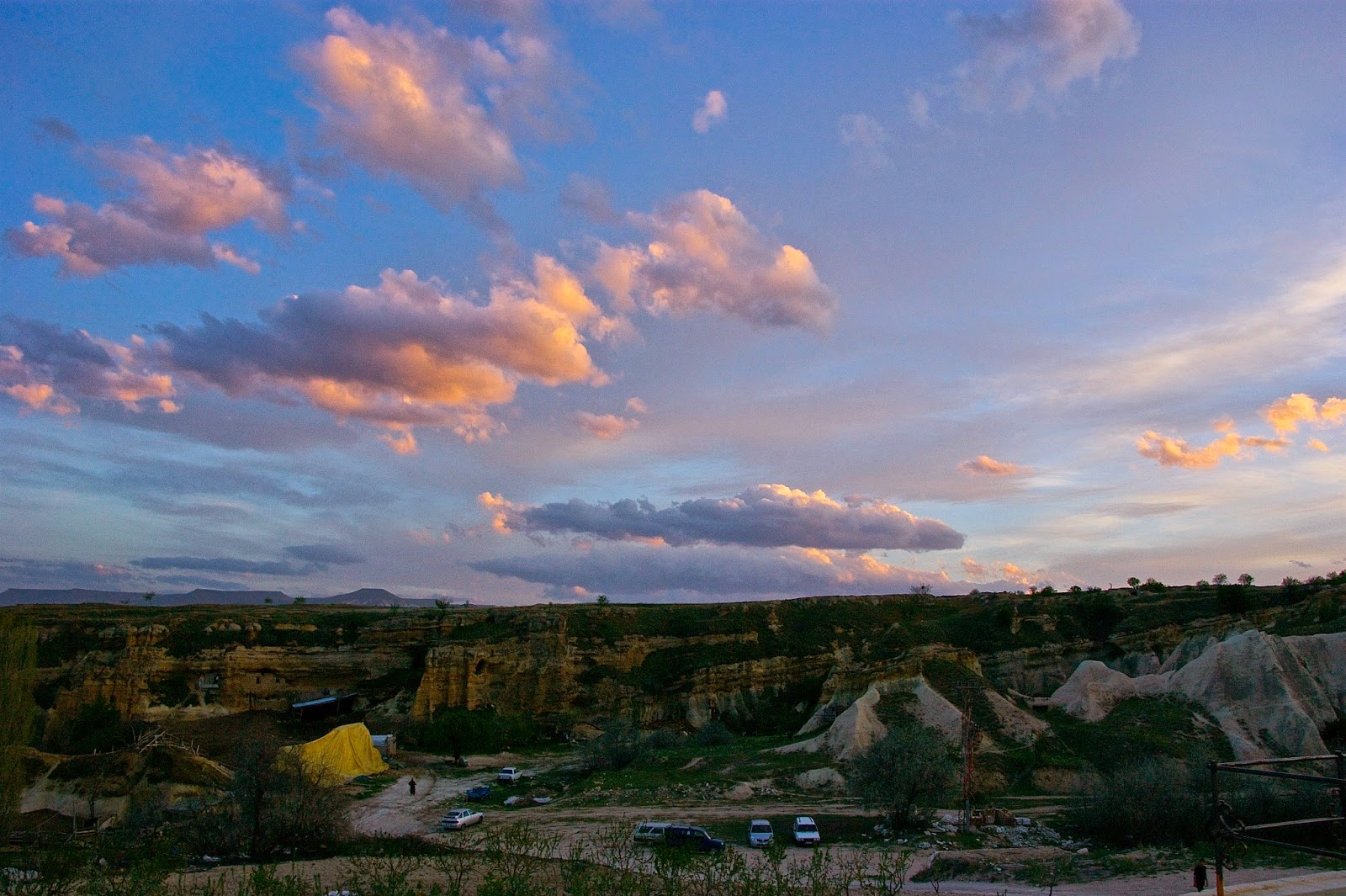 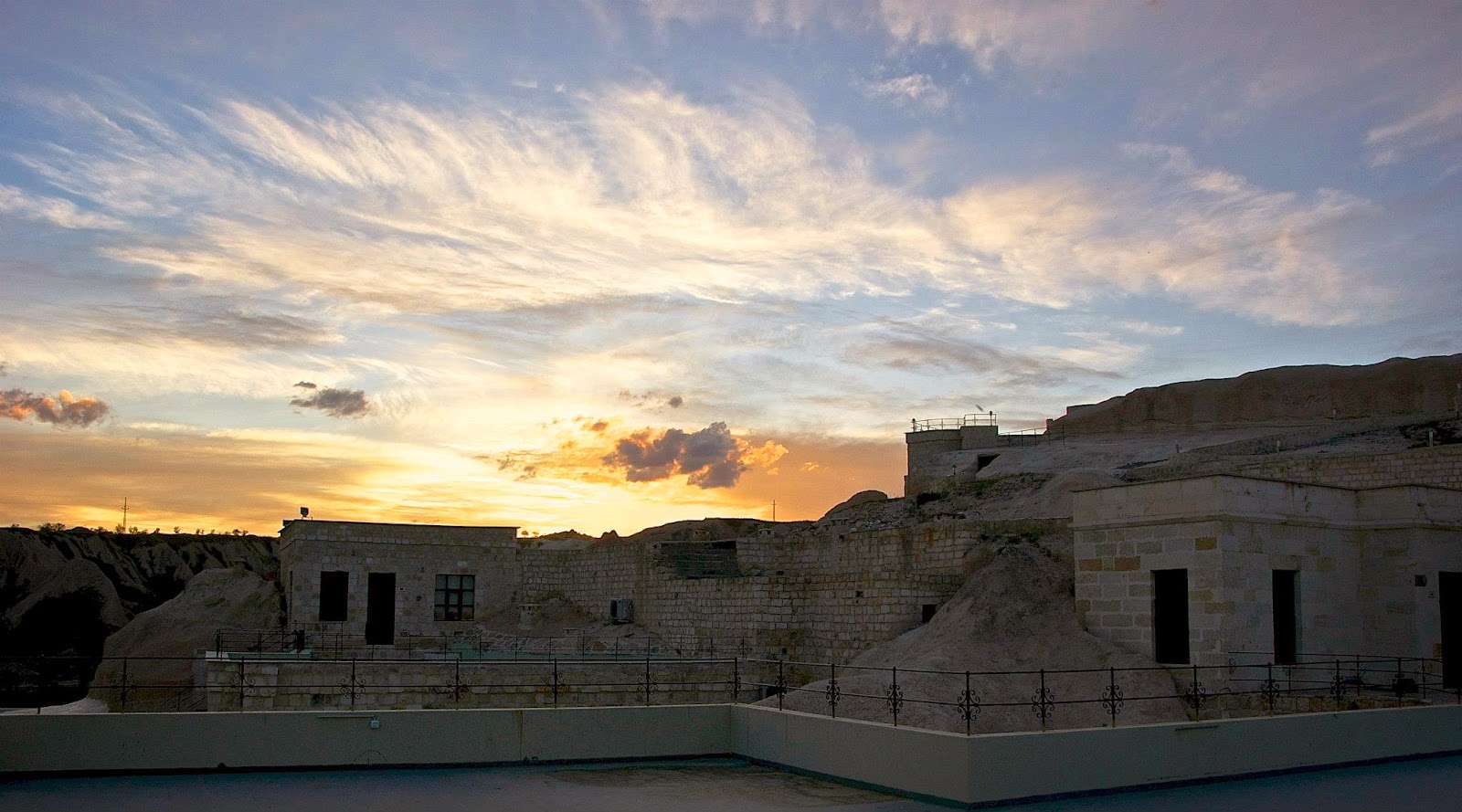 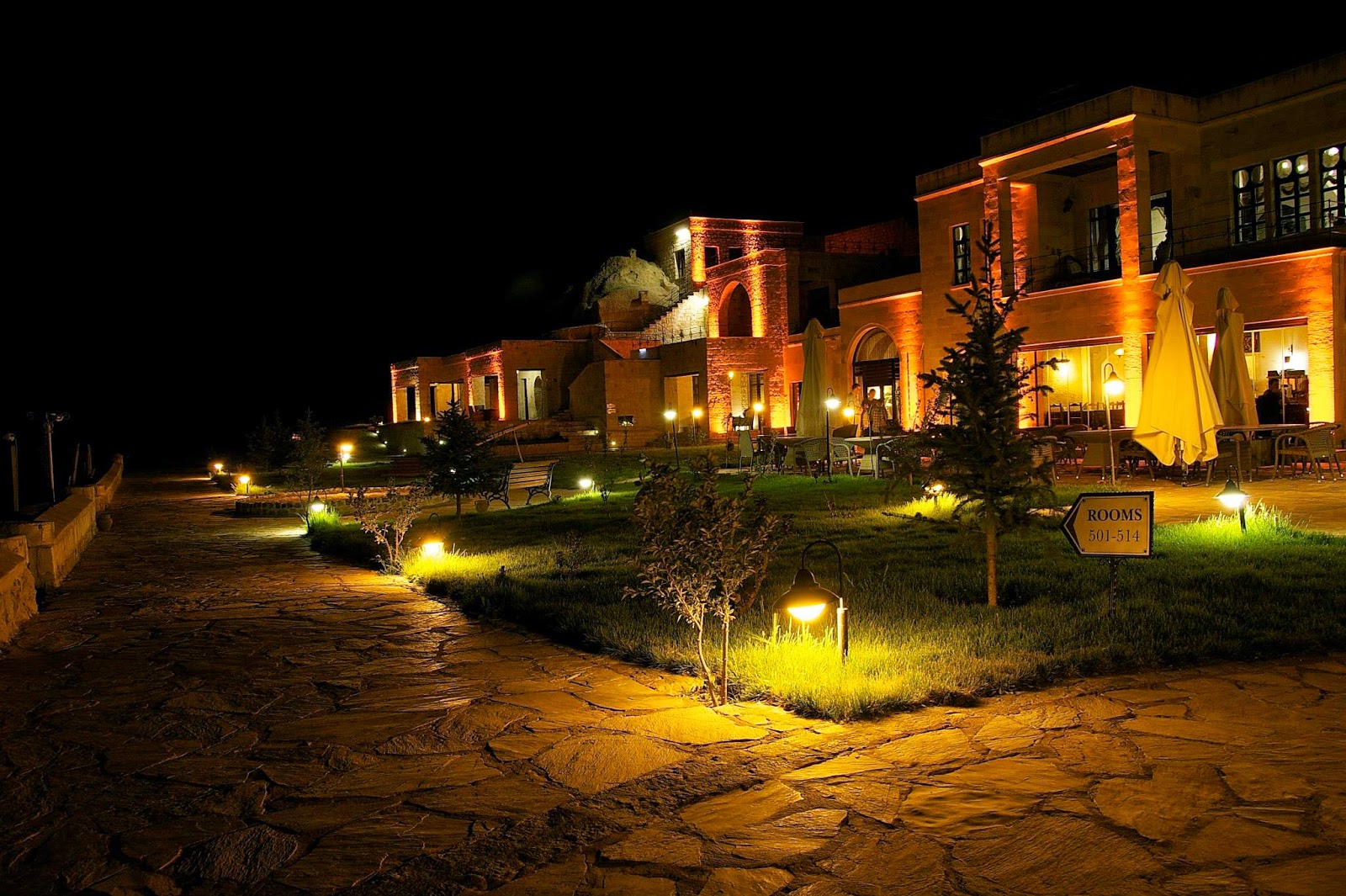 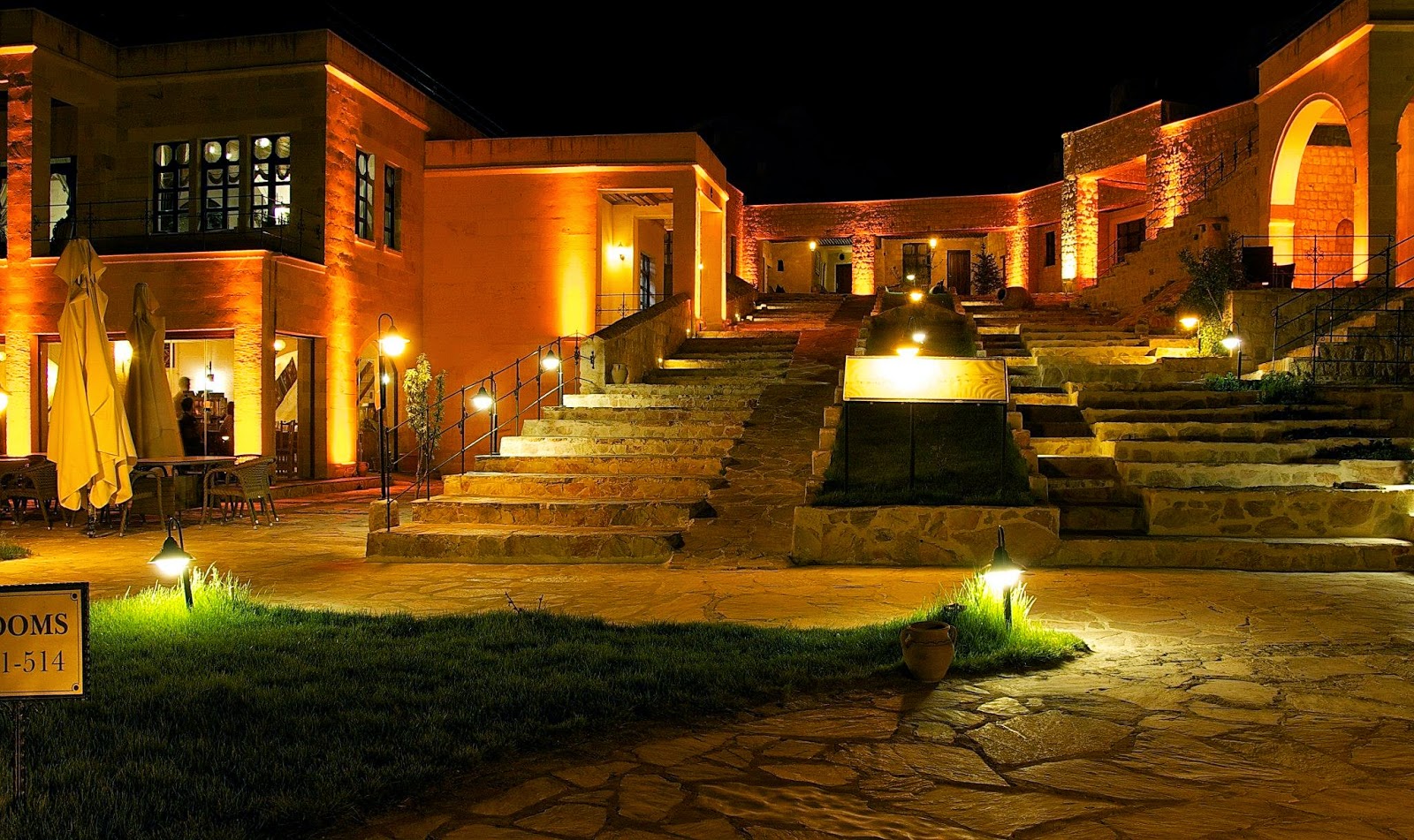 P.S. We noticed that there is also an Indian restaurant name Rasoi in Cappadocia. Unfortunately, we did not get an opportunity to try it out while we were there - but give it a shot while you are there.
Posted by Soma Biswas at 8:27 AM 5 comments: