Istanbul - where history and shopping meet

We visited Istanbul as part of our Turkey trip during Easter 2014.

The first thing that comes to mind - for us Indians - whenever we think of visiting a new place is "how difficult or time consuming it would be to get a Visa to that place?". Good news is that the Turkish government has recently introduced e-Visas, which are applicable for Indians as well, at least for those with a valid Schengen Permit / Visa, or Indians resident in the US, etc. In this scheme you can apply for a 30day Tourist Visa at e-Visa, pay $20, and have the Visa instantly in your inbox. So one hurdle removed for now - at least or some of us.

Turkish Airlines is one of the largest airlines in the world, and as such there should be good connectivity from wherever you are flying in. Note that there are 2 airports in Istanbul, though most international flights arrive at the Ataturk international airport. However, keep this in mind if you are booking a hotel close to the airport, as the other airport - Sabiha Gökçen - is almost twice the distance (60km) from Istanbul city center.

Trains are few (though cheap), and as far as we understood not well connected and never on time (mostly) - hence the availability of low cost domestic airlines. Again, keep the (2) airport(s) in mind if you are planning to take a domestic flight from Istanbul.

Taxis are cheap - esp. as compared to other European cities. However, they also have a bad reputation - like India taxi drivers - of trying to cheat you by taking a longer route, or not going by meter, etc. There is a lot of advice available on the net for this. In general, use your common sense, keep track of the meter,  negotiate a flat rate if the meter is not running, or simply change taxis if you do not feel comfortable after getting into one. Also, ask your hotel to call a taxi for you, whenever possible. Fortunately, we took 3 taxis, and we did not have a problem with any of them - they all went by meter and we do not think that they took a longer route - so hopefully the situation is improving.

The alternative to taxis is of course to use public transportation. Istanbul is well connected by a network of trams, metros, and buses. It is possible to reach all main attractions by public transport, and there is also a direct metro from / to the airport. The only problem is that they get pretty crowded - so might not be ideal if you have a lot of luggage with you. 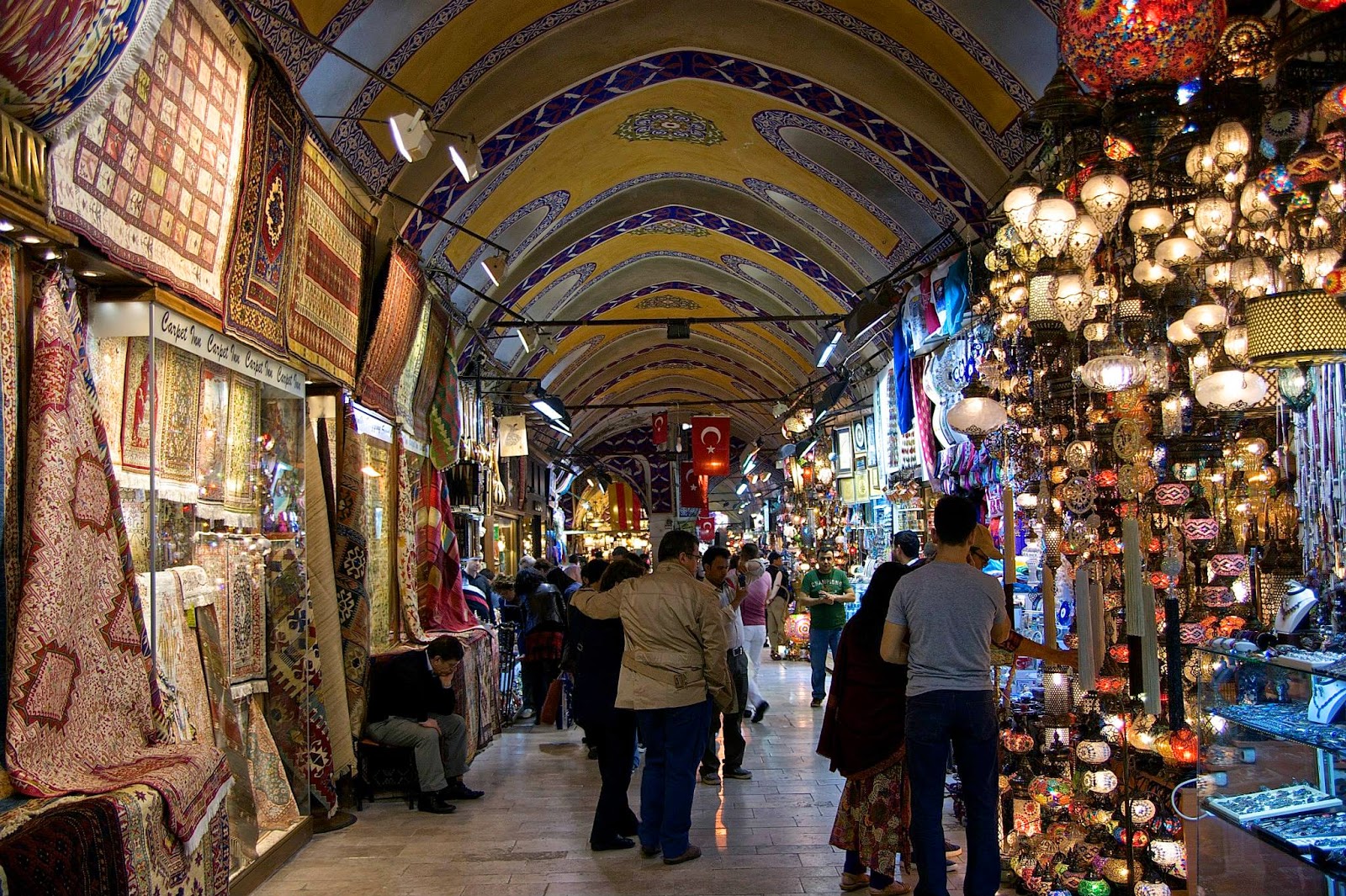 Grand Bazaar is like the quintessential flea market in a large city. Ambiance wise, it will remind us (Indians) of the New Market in Kolkata or Chandni Chowk in Delhi. There are narrow alleys full of small shops, everyone trying to sweet talk you into visiting their shops. We however did not find much variety in the stores as one would expect e.g. in New Market or Chandni Chowk. Most of the stores here sell jewellery, clothes, or carpets. Don't feel shy to bargain! We were successful in getting things at half the initial quoted price, so the actual price was probably even less than that.

It is easily reachable by public transport - just get down at the stop "Grand Bazaar". The bazaar itself is actually quite big and there are many entrances. Keeping track of the entrance gates is probably also a good way to orient yourself within the market.

One of the most unique attractions of Istanbul is that it is the only city to spread across 2 continents. And, the best way to experience this is to take the Bosphorus Cruise. There are many private companies, as well as a public ferry, offering this cruise. As can be expected, the public ferry is cheaper, but can get quite crowded on weekdays. You can take the cruise from either the Asian or European side.  An option here is to take the ferry one way, and return by the recently inaugurated (impressive) underground metro that takes you across continents.

There are many dinner cruises offered by tour companies on the Bosphorus. Unfortunately, we did not get an opportunity to sample one of those, but the cruise is every impressive - scenically - during daytime as well. 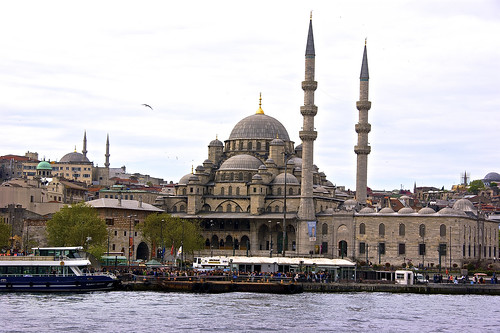 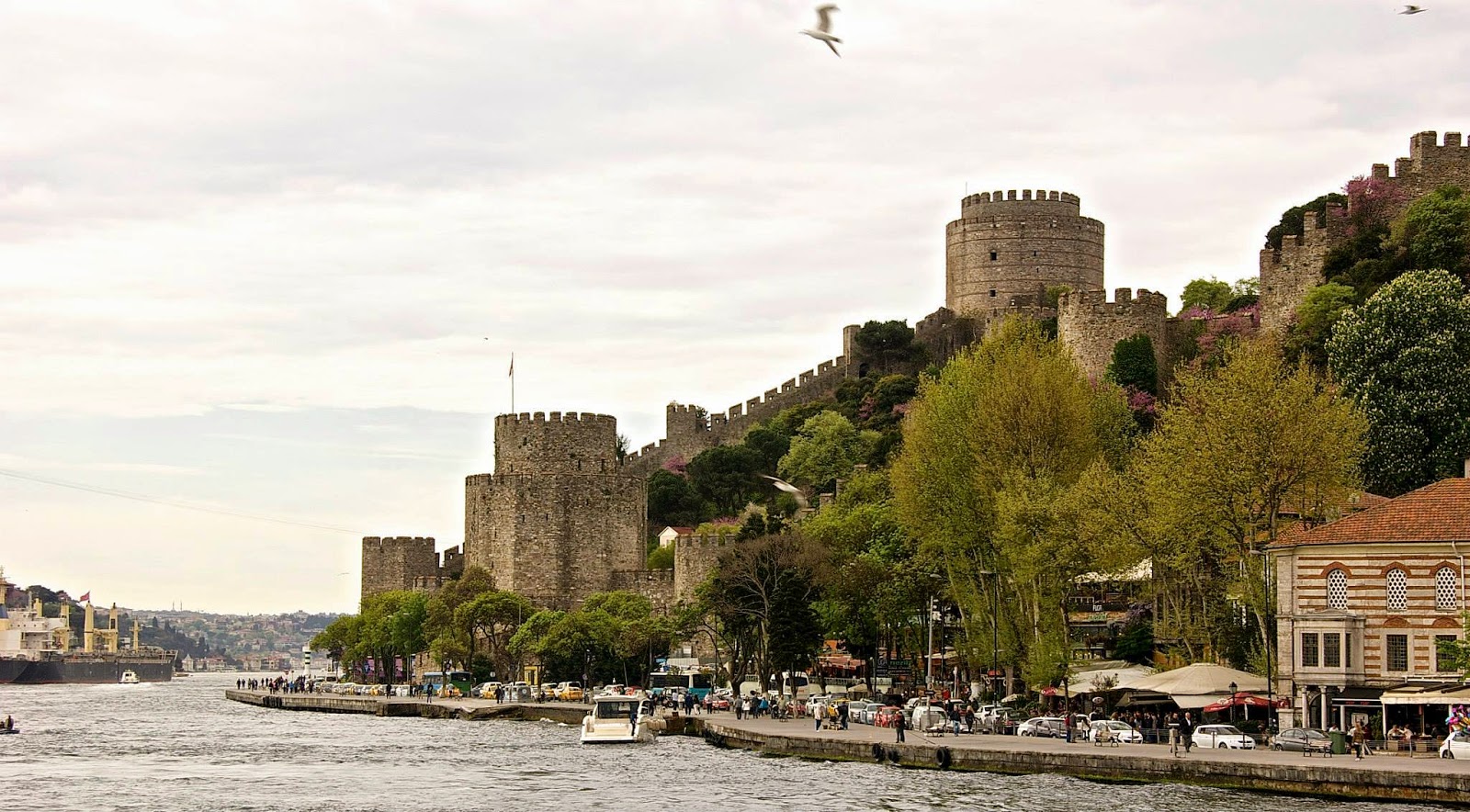 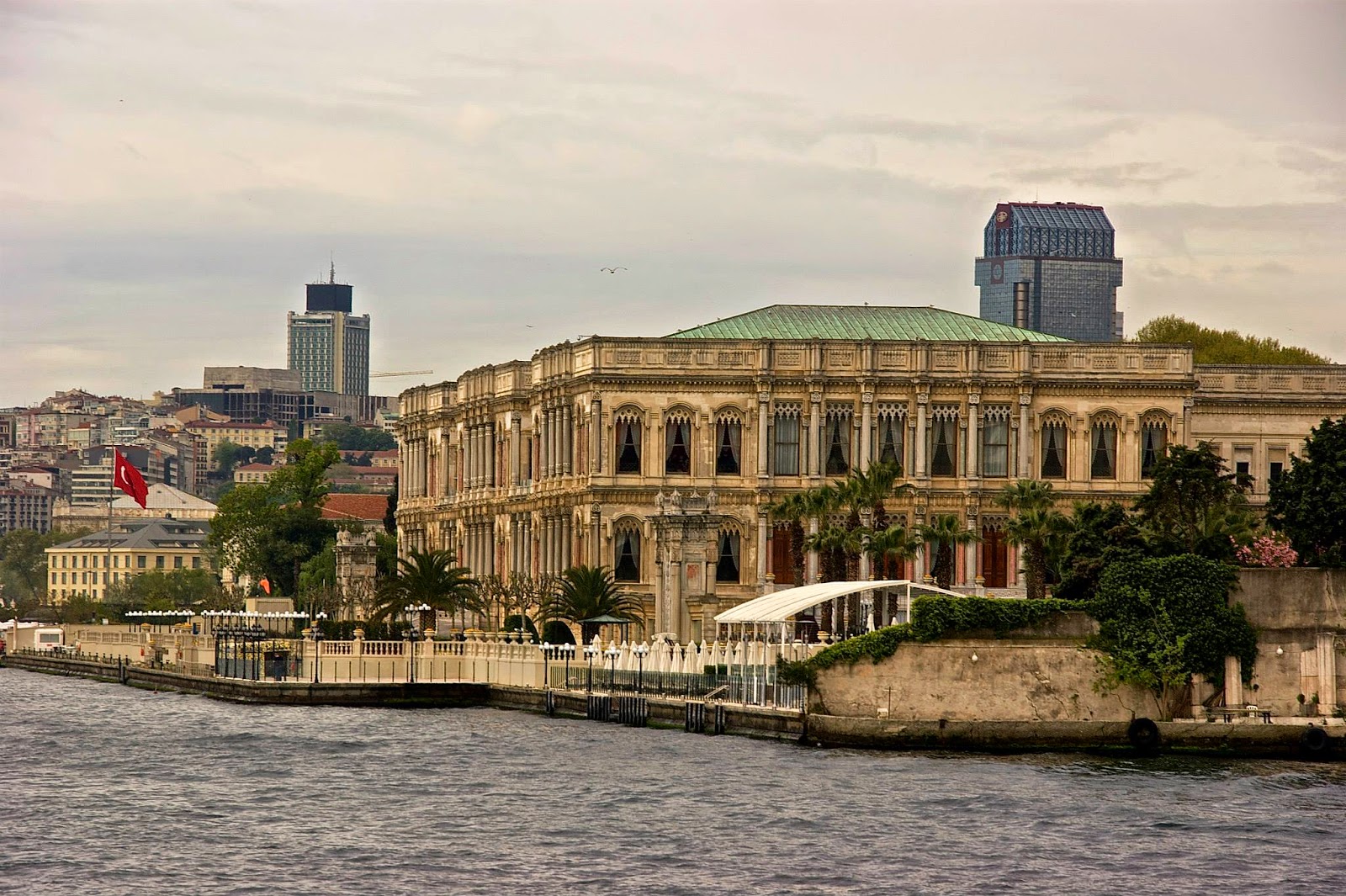 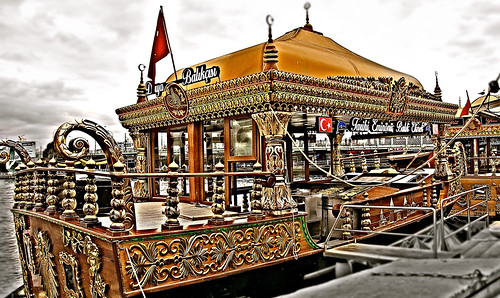 A good vantage point for taking pictures, close to the cruise starting point, is the "Pierre Loti". You can take a cable car to Pierre Loti's cafe / tea house - which is named after the famous French novelist / naval officer of the same name - famous both his (romantic / dramatic) personal life and for writing many geo-political novels on Turkish life. Even if you are not interested in literature, the panoramic views itself are well worth the detour. 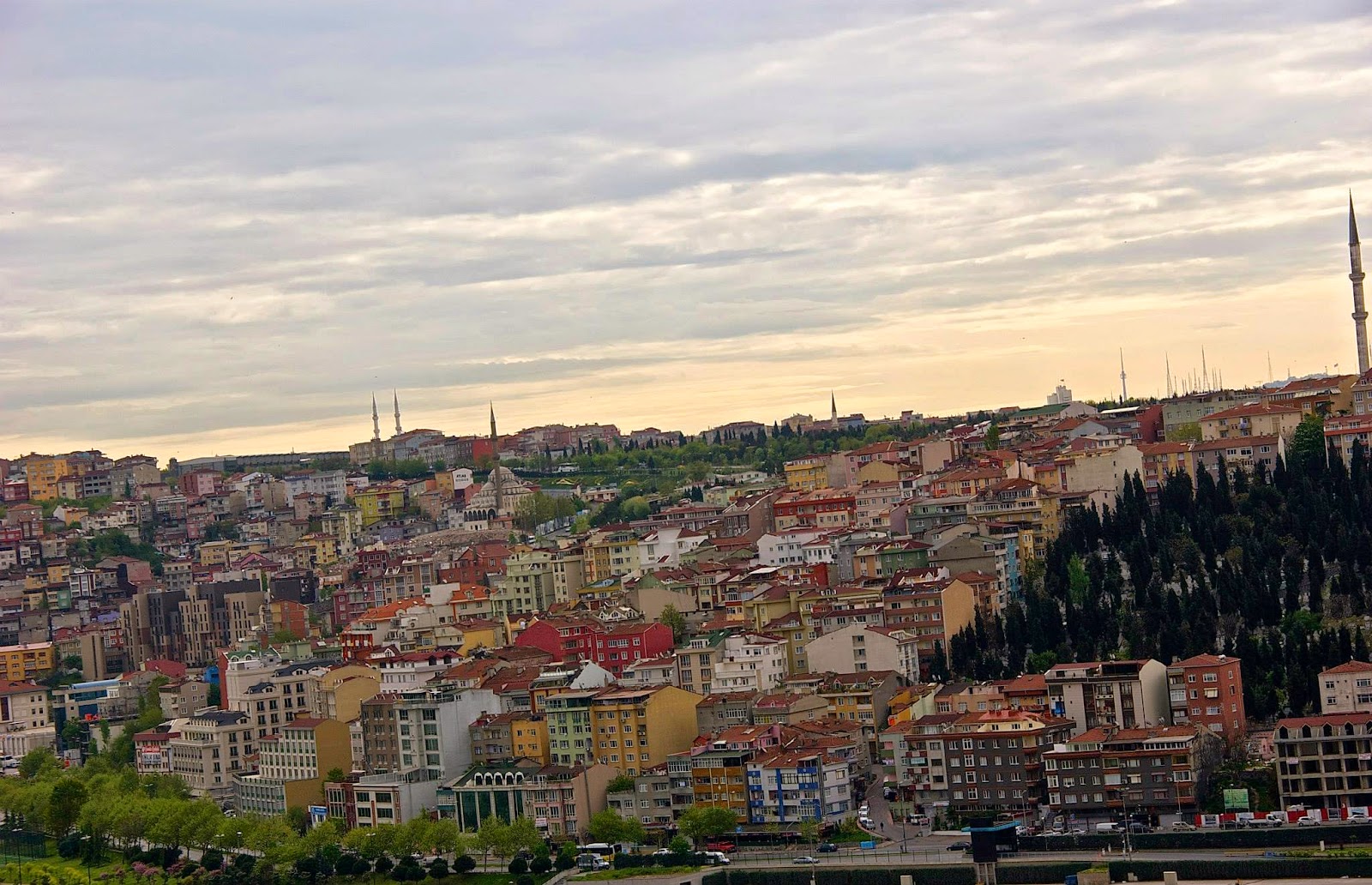 
The good thing about the famous monuments here - Basilica Cistern, Blue (Sultanahmet) Mosque, Hagia Sophia - is that they are all pretty close to each other. So you can basically get down at Sultanahmet square, and then walk around from there. The walkways around are lined with all types of stores from traditional restaurants, cafes / bars, to souvenir shops, to (0% commission) forex stores. So you can definitely spend the whole day there.

We won't dwell too much into the historical aspect of the monuments here - as like us - you are also probably more interested in marveling at their architecture than their historical details. Still, we do recommend taking a guide, or a guided tour, as these places can get very very crowded, esp. in summer. The tour guides seem to have reserved lanes at most of the monuments here which would allow you to save a lot of waiting time. We had taken the "Best of Istanbul" day tour with True Blue tours, and we can definitely recommend them.

This used to be a huge underground water storage facility, which has now been opened for the public. 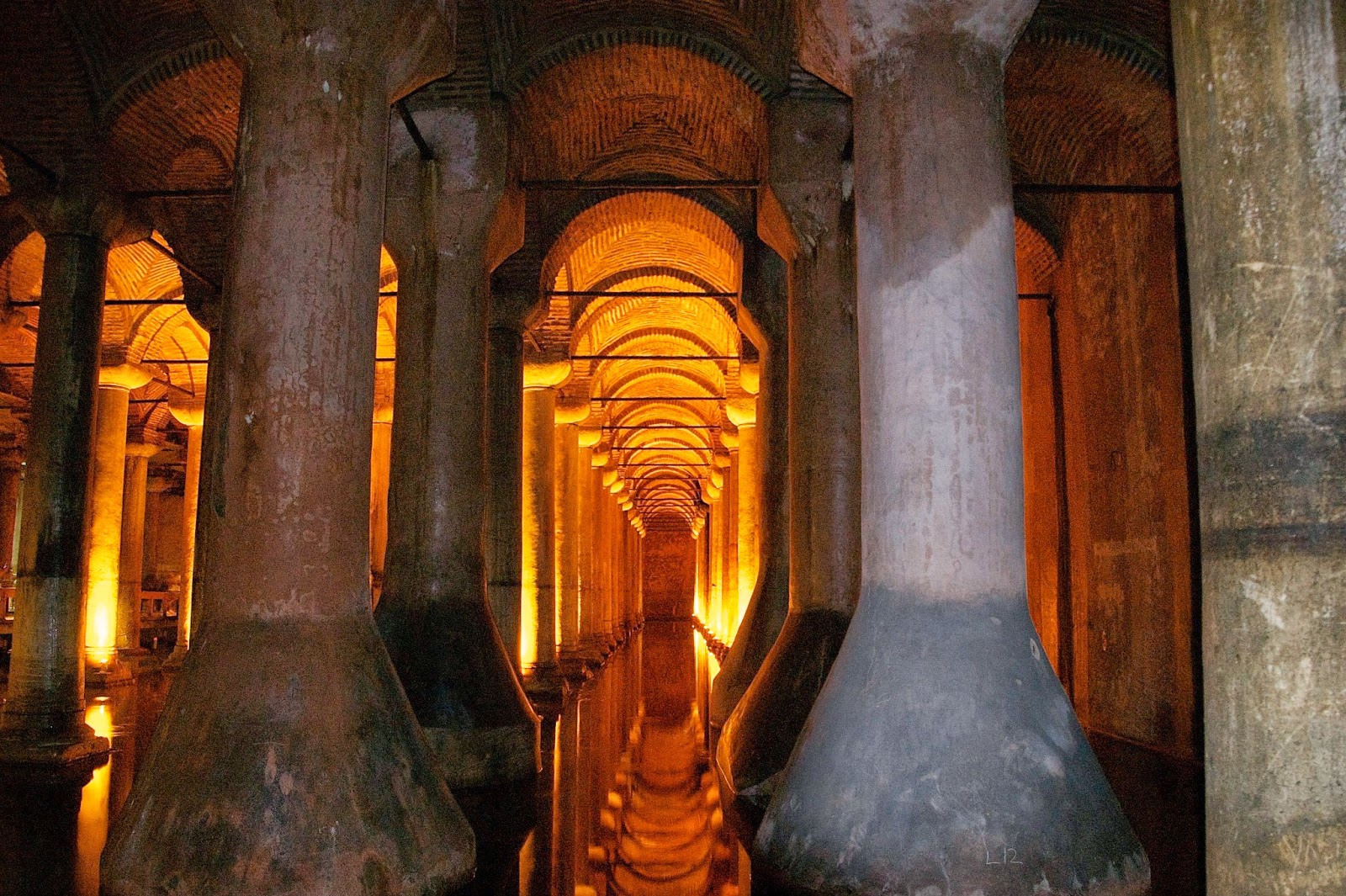 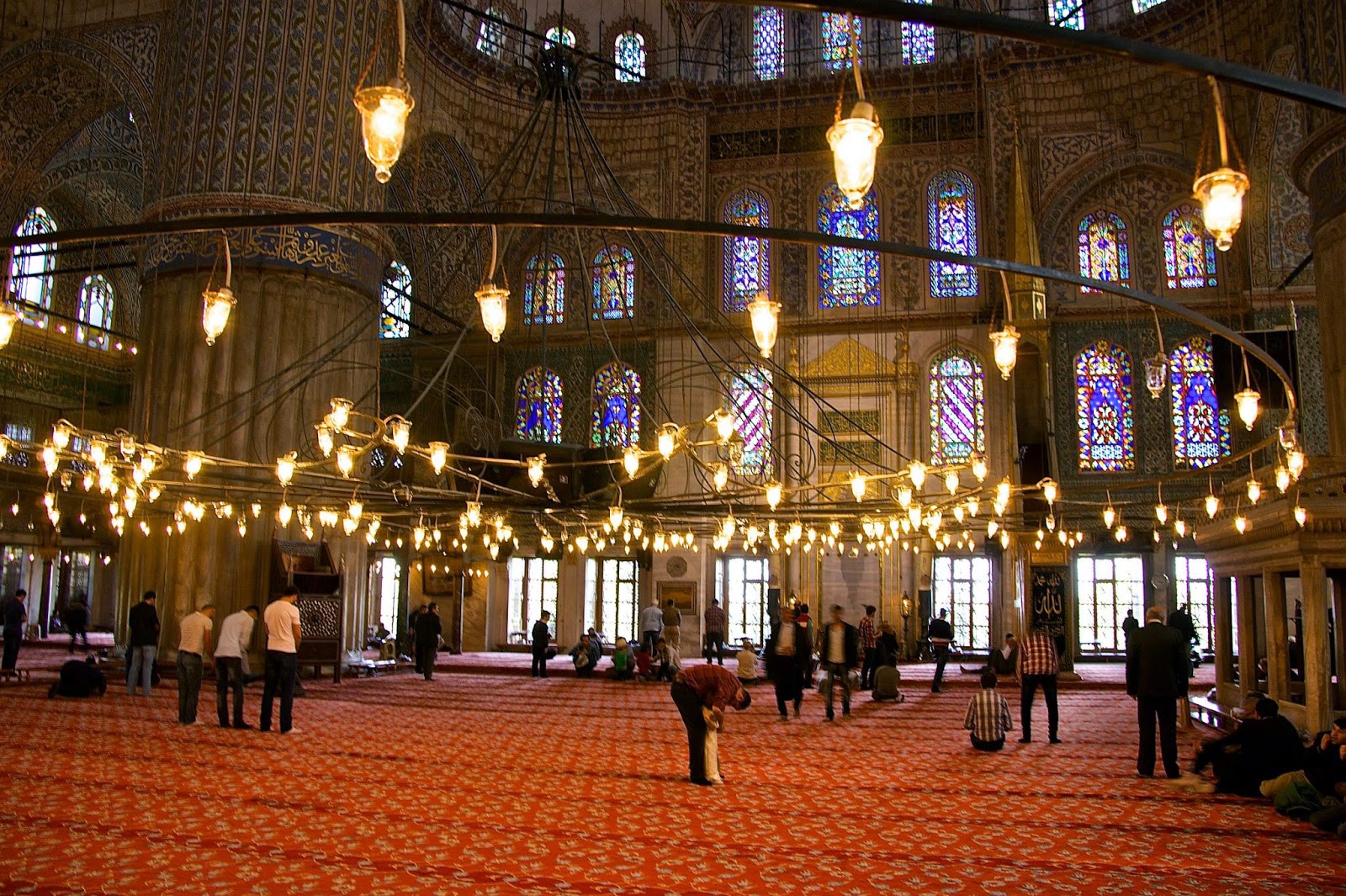 View of the Blue Mosque - from inside the Hagia Sophia. 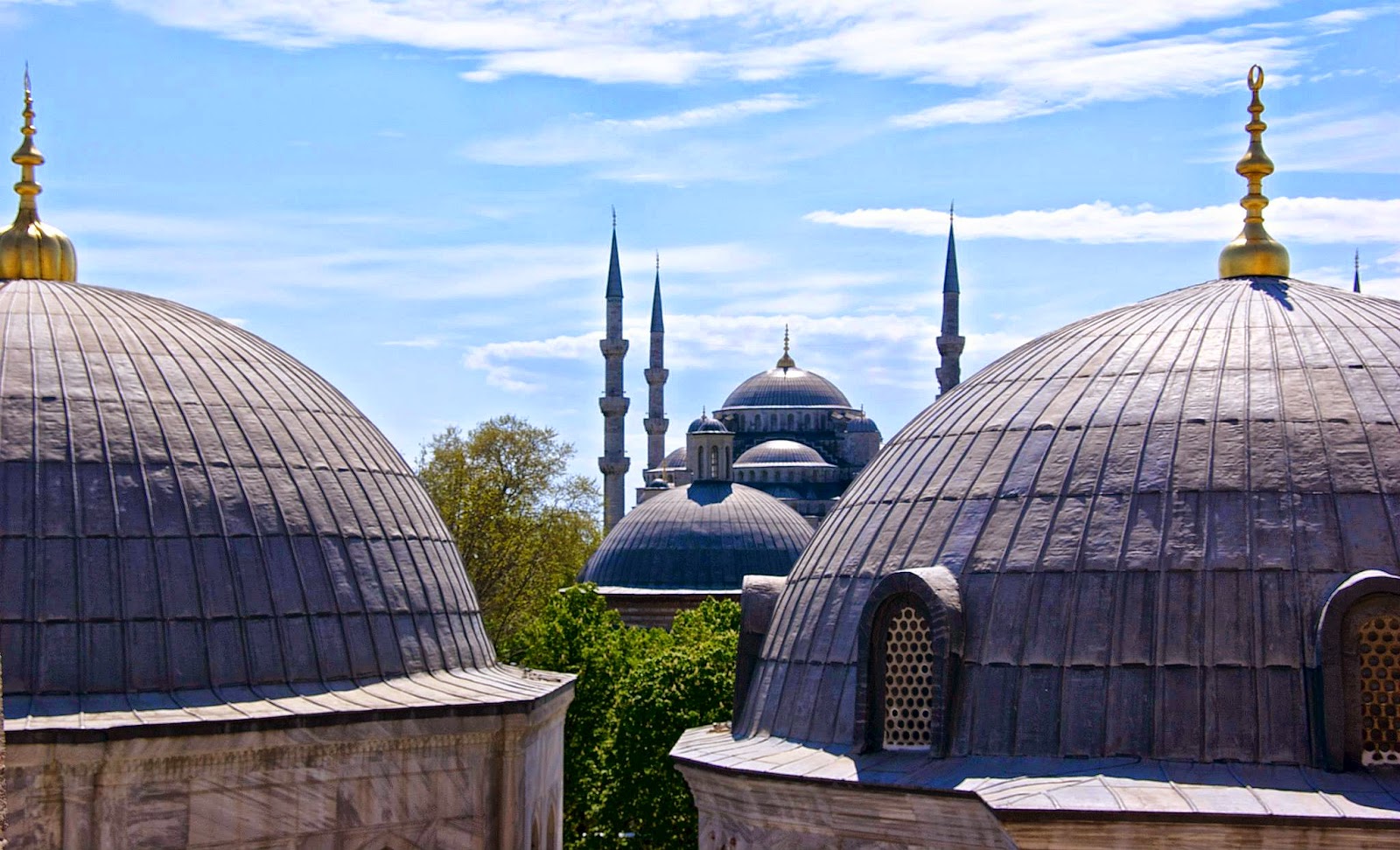 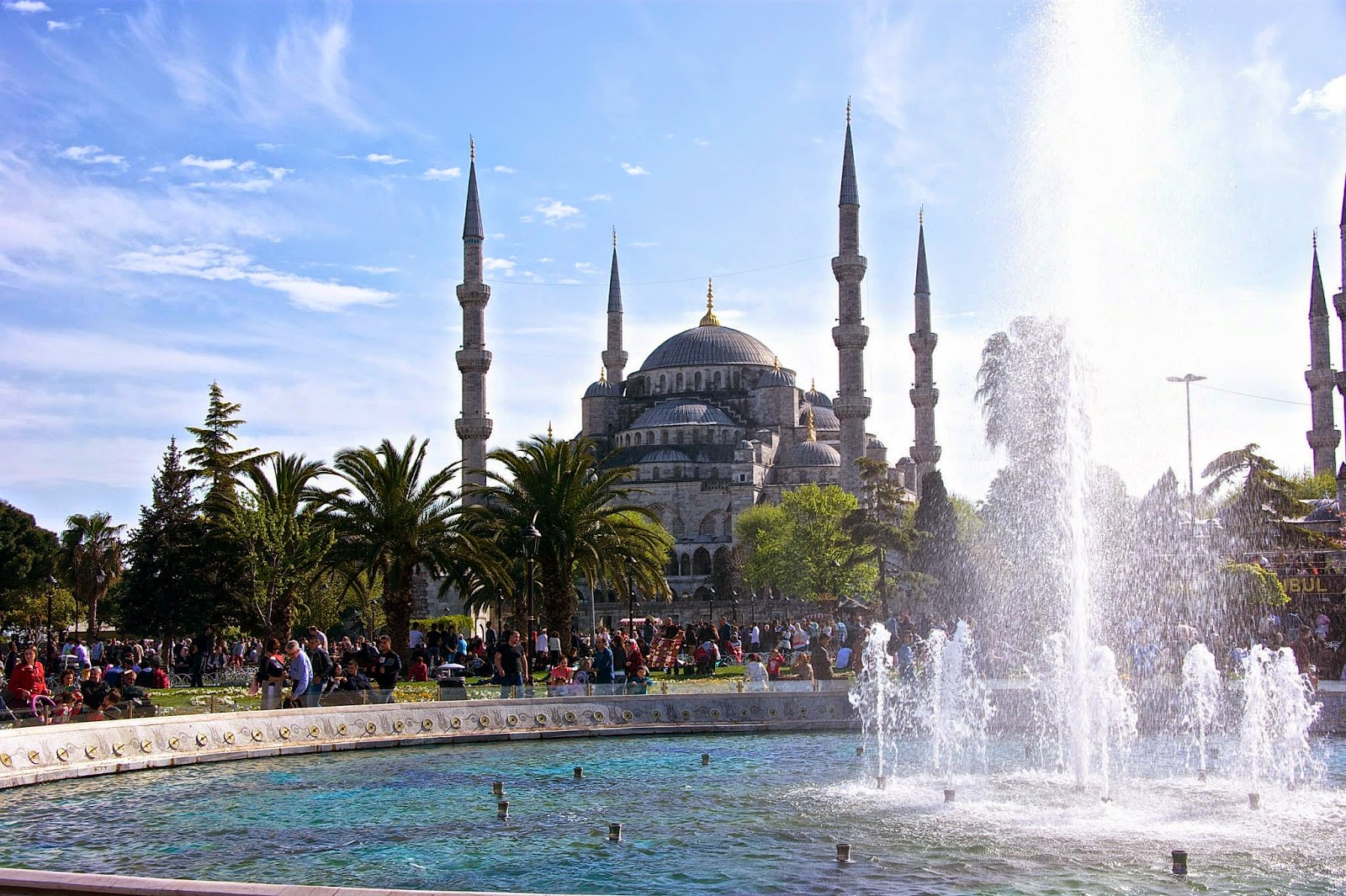 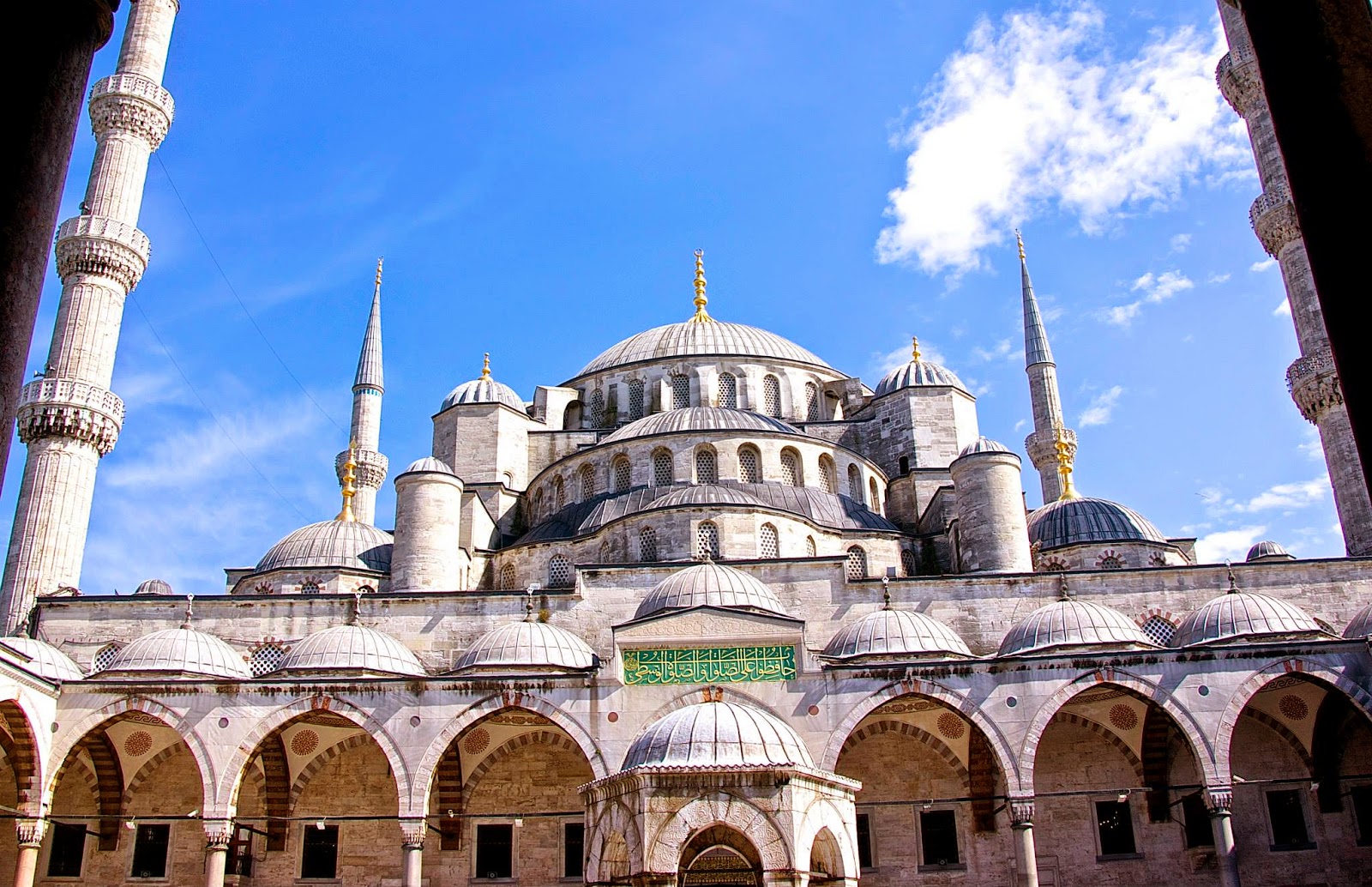 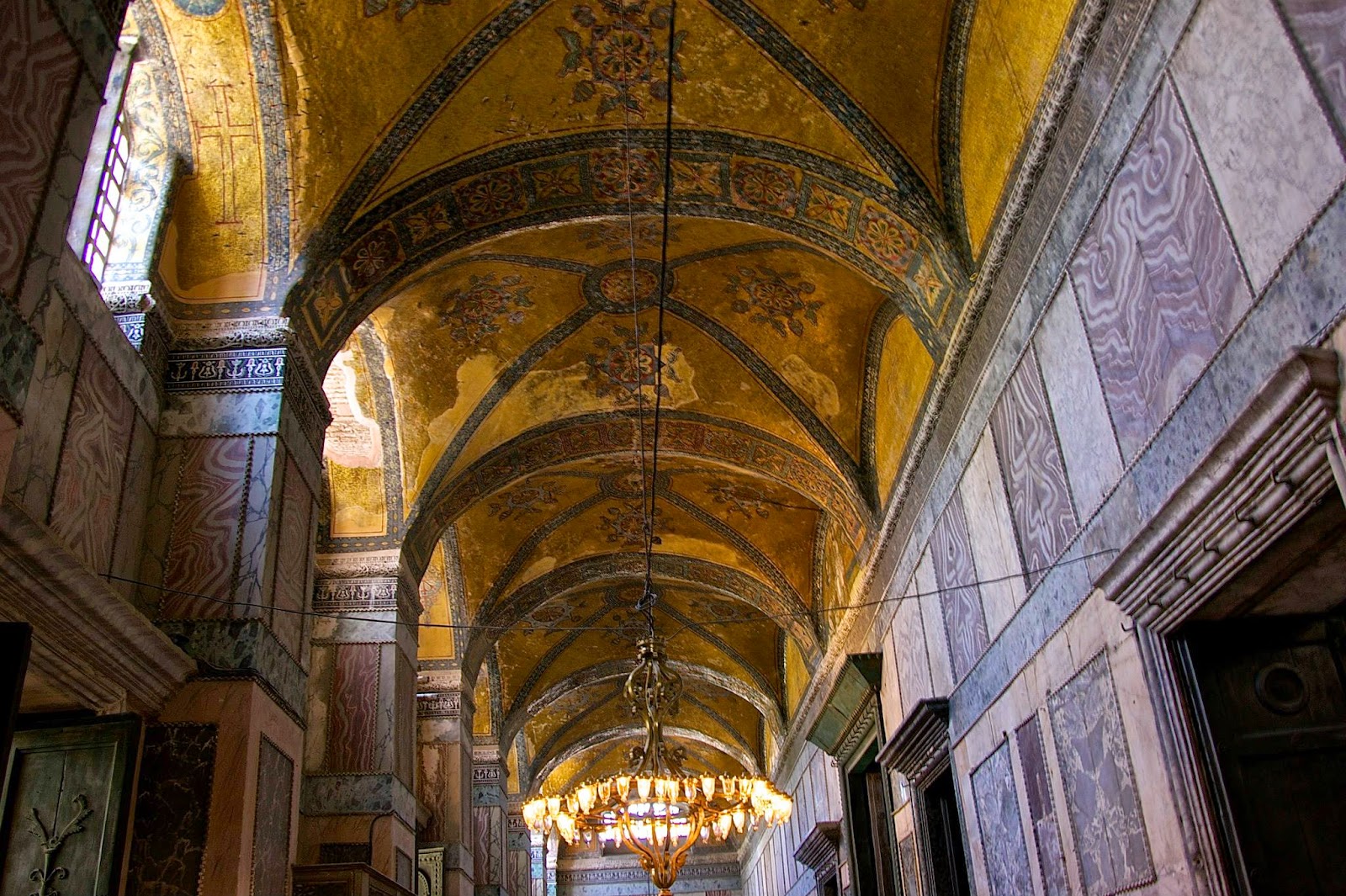 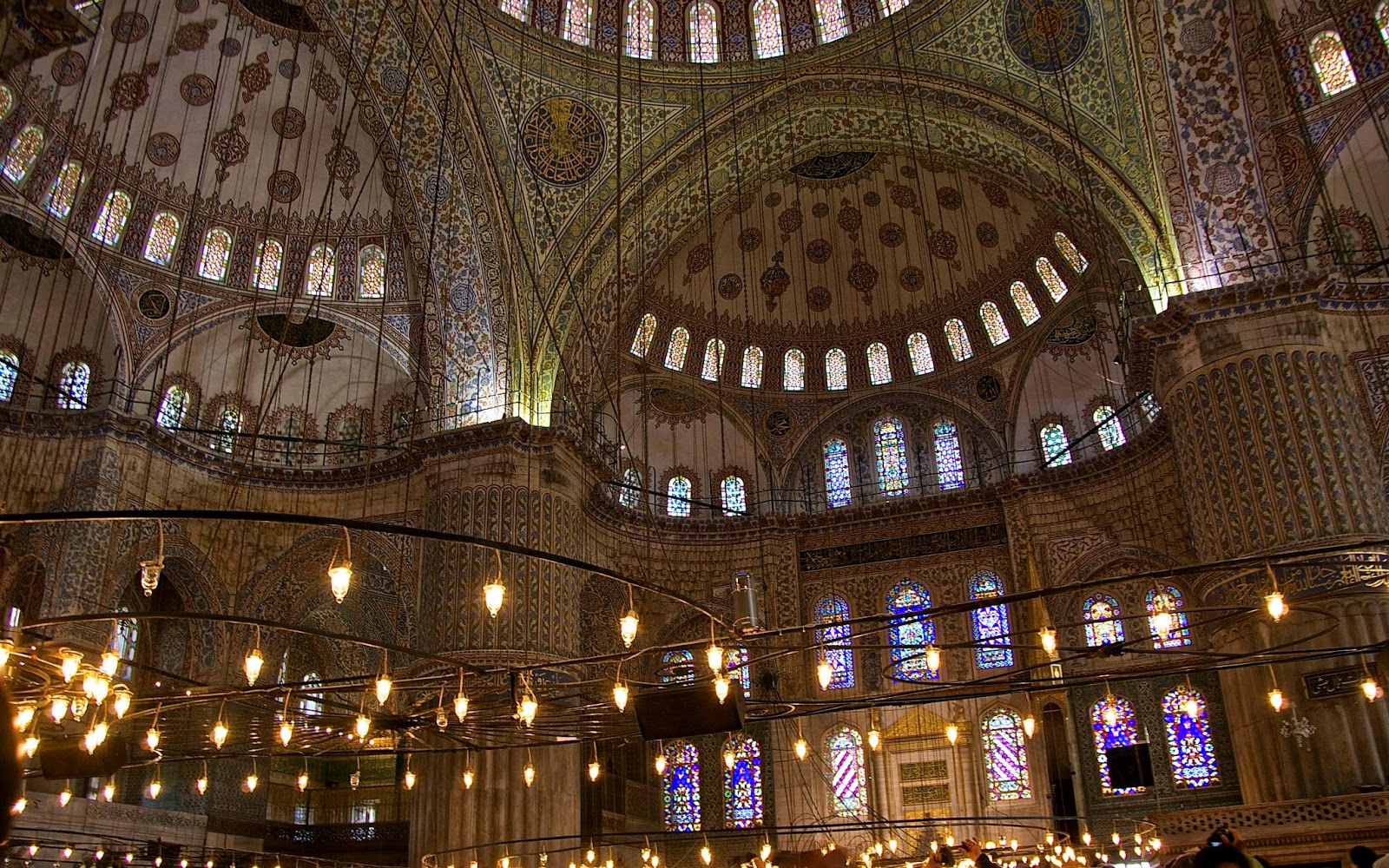 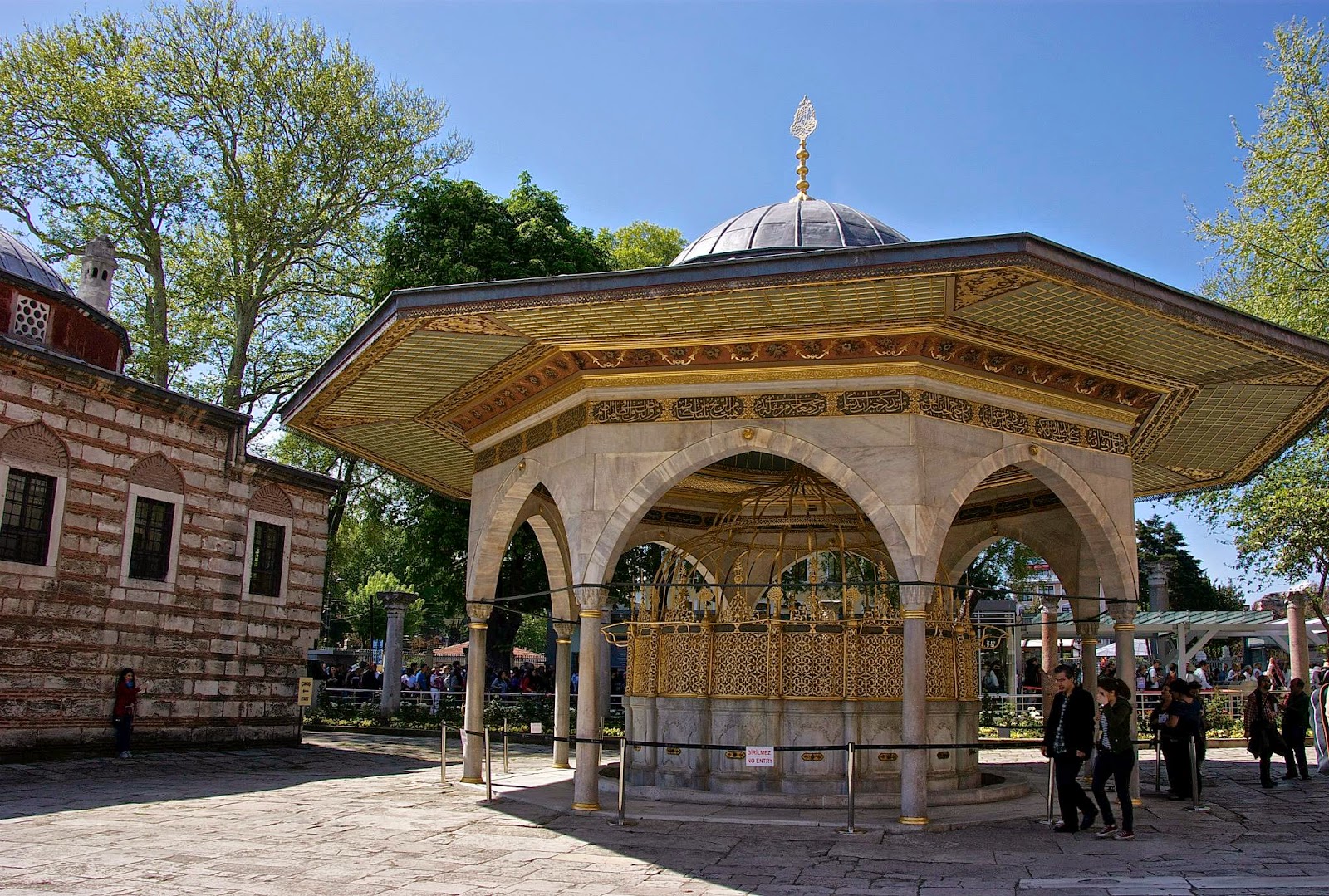 Gülhane Park, close to the Blue Mosque, is a good place to relax and take a break, if you get tired of walking! 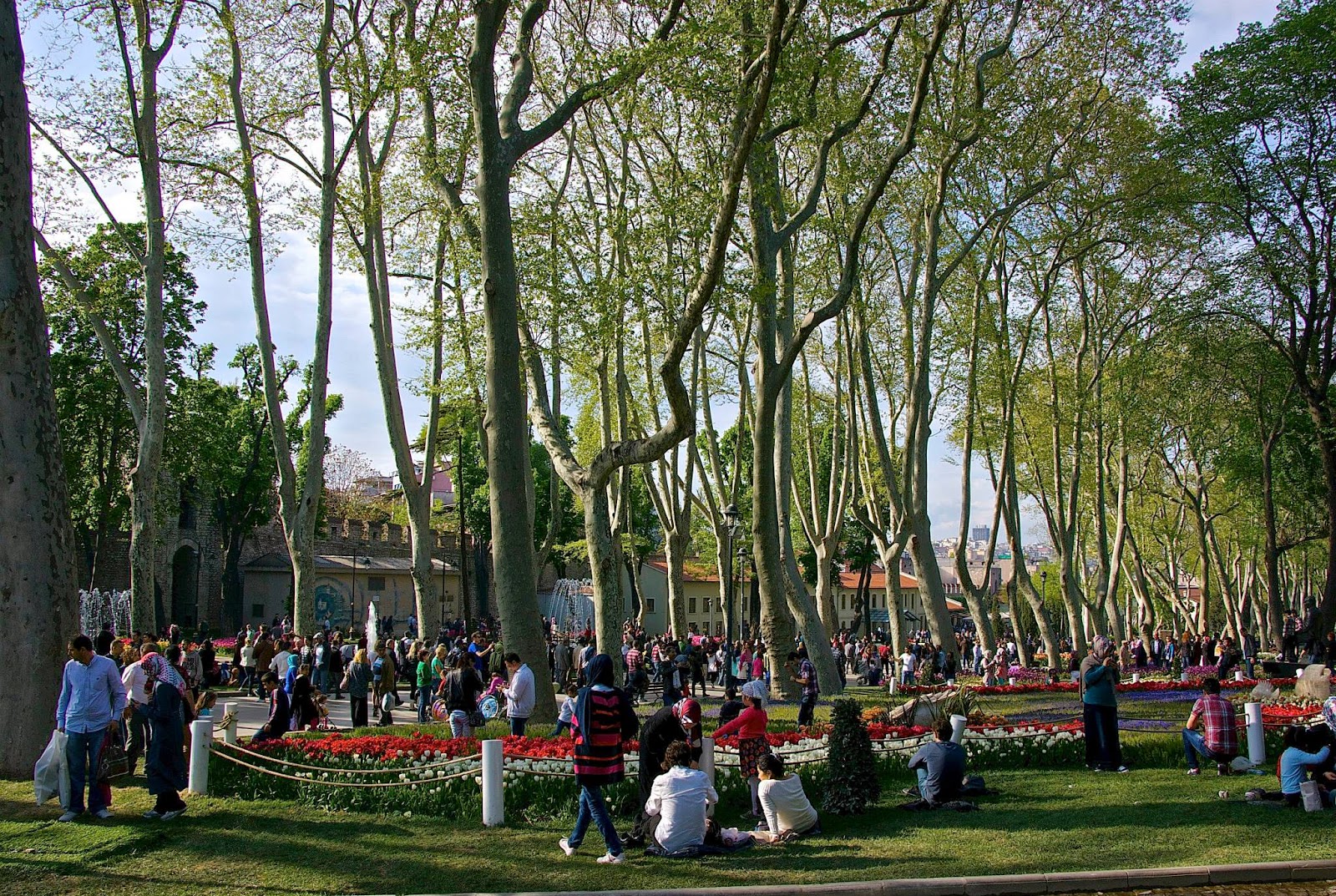 Before closing the post, enjoy the beautiful flowers of Turkey - which remind us very much of the warm, friendly, and colorful people we met during this trip! 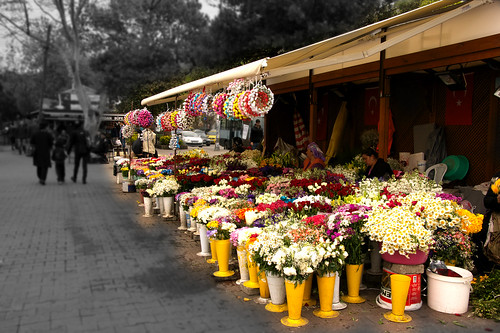