We had a long break in Dubai during our year end (2013) holidays trip to India via Emirates Airlines. So we decided to take advantage of the Emirates Dubai Connect program to spend some time in Dubai.

There is not much information available about the Dubai Connect program on the net, so we were initially a bit confused regarding the whole process. So let me summarize our experience here which would hopefully help future travelers. (Please take these as general guidelines and not concrete / legal rules.) To be eligible, you need to have booked a flight with Emirates with  at least an 8 hour break in Dubai.

It is also imperative that you do not belong to a country whose citizens cannot be granted a Visa-on-Arrival. In general, Indians also are not eligible for Visa-on-Arrival in Dubai / UAE. But in this case, they are willing to make an exception I guess, to both improve tourism, and to get more people to fly with Emirates as it is their National Airlines. Also, bear in mind that these transit visas are intended for Indians who are traveling from (or whose final destinations are) Europe / North America - as a result the authorities probably think that their chances of remaining illegally in Dubai is much less. To cut a long story short - YES - Indians are eligible for these stopover / transit visas on arrival. All you need to do is to get the hotel / visa vouchers from Emirates either during Check-in, or at the Customer Service desk at Dubai Arrivals (Emirates also pays the Visa fees).

So when you reach Dubai, proceed as if you are exiting the airport, and not follow the Transfers signs. Your baggage would have been checked-in all the way to your final destination, so remember to pack a spare set of clothes in your carry-on luggage. Once through Immigration, proceed to the Hotels desk (via Exit 1). Be prepared to wait 15-20 mins here for the hotel shuttle. You are most likely to be given accommodation at the Millennium or Copthorne Hotel. The hotels are adjacent with Copthorne almost seeming like a low cost version of Millennium, which is where you are mostly likely to end up with an economy ticket :) Having said that, Copthorne seemed like a decent 3* star hotel and you really cannot complain considering Emirates pays for all the hotel / meal costs. 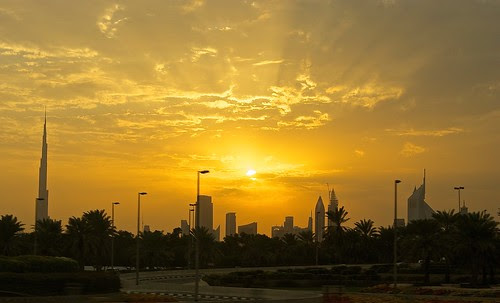 
The good thing about the hotel is that there is a Sun Tours desk in the hotel itself which allows you to take tours starting / ending in the hotel itself. There are various tours of length 2 hours to day tours. We took the 4 hours tour (costs 150 AED per person). The coverage of the tour was good in that we got to see most of the well known attractions, e.g. Burj Khalifa, Jumeirah Beach, Shopping Mall, but there wasn't much time to get down from the bus and explore the sites (or even take pictures) - and we were left turning our heads left / right whenever the tour guide said so from within the bus :). The tour also included a visit to the Shopping Mall to watch the 5min musical fountain show (below). The final tour stop was at the Gold Souk which is the traditional gold market in Dubai - so might be of interest to Indian tourists (and ladies of any country, of course). The prices were definitely cheap but we got a bit apprehensive when people there started bargaining prices (Yes, of the gold ornaments ...). So our recommendation would be to shop from there only if you know a local or someone who can vouch for their authenticity. 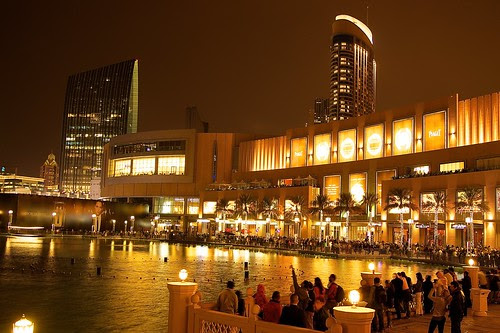 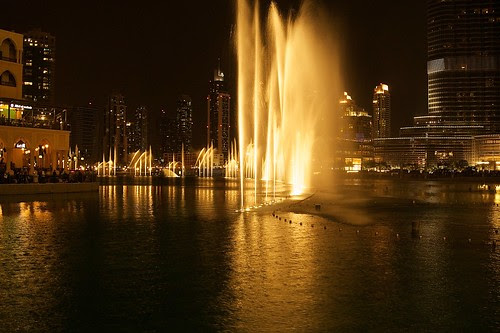 In the short time we spent in Dubai, Dubai seemed like a man-made wonder - impressive to say the least but lacking in originality. For whatever it lacks nature / history wise, the plan seems to be to pour in money to build its replica. For instance, the Fujairah mosque (below) which is a close replica of Istanbul's Suleymaniye Mosque. 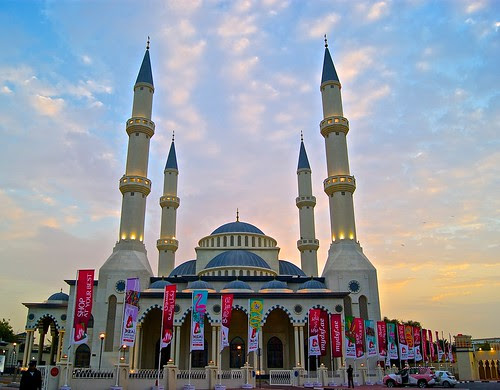 Dubai has the world's tallest building, largest shopping mall, highest indoor skiing slope, a mini Venice, artificial beaches, etc. In short, there is no dearth of sightseeing attractions in Dubai, but somehow the excitement of exploring a natural wonder, or going back in history, was missing! However, to each his own, and the highrises, swanky hotels / clubs /malls, might indeed appeal to many.
Posted by Soma Biswas at 8:53 AM 63 comments: