Part I of the blog appears here: Scandinavia cruise - Part I


As the capital of one of the most developed countries in the world, Stockholm gives you the impression of a very well-organized, spacious (not over crowded) city with very good public transportation.

Primary attractions here include the Royal Palace. Like in the UK, people here are also very proud of their royalty. Sweden's princess Victoria had recently been married when we visited Stockholm, so there was probably more than the usual share of royal memorabilia to be seen everywhere but it is quite evident that people here love their royalty.

Coming back to souvenirs, toy ships are probably the most common souvenirs here. Our tour guide told us that almost 1 in 4/5 families in Sweden has a boat, so the fascination with boats is understandable.

Finally some photography tips from Stockholm before heading to the next stop. If you are a photography enthusiast like us, do not miss the Stockholm Globe Arena, aka Ericsson Globe. It is currently the largest hemispherical building in the world. What makes it even more interesting are the Funicular rails on the sides that take you to the top - from where you can get an amazing bird's eye view of Stockholm (below).

Gothenburg is the second largest city in Sweden. It is located along the Göta river coast. A few pictures from the coastline below:


Of the 3 capitals we visited during this trip, we liked Oslo the most. It was raining that day and the city looked lush green in the rain. There is a lot of greenery everywhere and not so much crowd - which is how cities should be. Oslo (Norway in general) is (in)famous for being one of the costliest places in Europe and that shows in the standard of living here.

The most famous tourist attraction here is clearly the Vigeland Sculpture Park. It has over 200 sculptures by Gustav Vigeland.

We also visited the Holmenkollbakken ski jumping hill in Oslo. When we visited in 2010, the jumping station had been demolished completely and was being rebuilt for the Nordic World Ski Championships 2011. Due to its height, it is also a very good place to get impressive (bird's eye) views of Oslo.

Historically, Denmark was the strongest of the 3 countries ruling over Sweden and Norway for many years. Actually, Norway was the weakest till Oil and Natural gas reserves were discovered in Norway and fortunes reversed. We found Copenhagen to be most industrialized but also most crowded at the same time.

More than scenic beauty, Copenhagen seems to be more famous for its sculptures, museums and palaces. The most famous sculpture is The Little Mermaid which is based on Hans Christian Andersen's famous fairy tale by the same name. Unfortunately, the statue itself was on loan to Shanghai when we visited Copenhagen - so they had set up a live video feed where you could see the statue on display in Shanghai (below).

We took the Royal Caribbean 3-nights Scandinavian cruise in Fall 2010.

Our cruise ship (Vision of the Seas)

The cruise started from Stockholm, Sweden and terminated in Copenhagen, Denmark docking at Gothenburg, Sweden and Oslo, Norway in between. The cruise is ideal to get a feel of Scandinavia though definitely not comprehensive as a day in each of the cities in the itinerary is clearly not sufficient to explore the cities fully - Stockholm, Oslo, Copenhagen are touristic hot-spots in their own right.

A 3-nights cruise is also a good way to "try out" cruising at a reasonable price (if this your first time), and in the worst case you won't be trapped for long if you get bored. This was actually our first cruise, and we had a lot of apprehensions before boarding

Fortunately, all our fears above turned out to be baseless and we really had a gala time on board - which led us to take our 2nd much longer cruise within a year - Adriatic Sea cruise. To briefly answer the above issues: 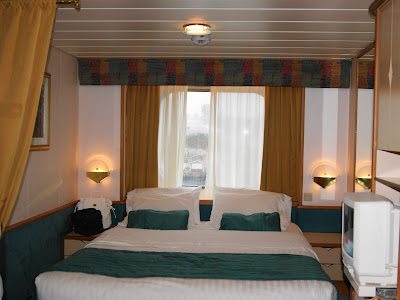 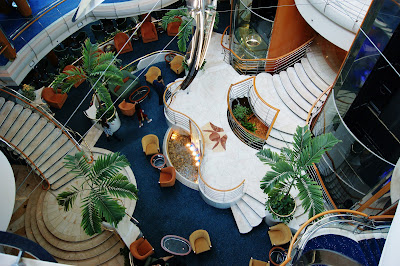 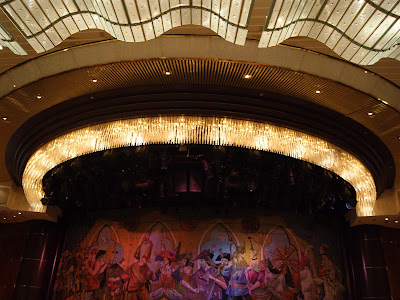 Theater inside the ship

Details of the stopovers in this itinerary - Stockholm, Gothenburg, Oslo and Copenhagen in Part II of this blog. Coming soon!