The is part II of our Arctic circle cruise - Part I appears here. 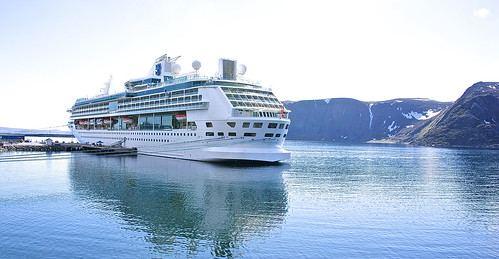 The reason why the cruise is called the 'Arctic Circle' cruise - rather than simply the 'Norway Fjords' cruise - is because we crossed the 'Arctic circle' on the second day of our cruise. The Arctic circle is a geographical landmark. Without going into a geography lecture, in very simple terms; crossing the Arctic circle means that you are now cruising in the Arctic ocean, and moving close to the North Pole. It is characterized by many a geographical phenomenon, e.g. the "Midnight Sun" - here the sun either does not set the whole day, or it will set e.g. at 2am in the night, and then come up again at 3am. This is what happened during most of our cruise, and we hardly saw any "night".

We were slightly disappointed in the cruise - as the keywords "Arctic circle", "North pole" - immediately conjured images of floating icebergs and glaciers. While we did see some glaciers (see 'Olden' below), there were no icebergs to be seen. We were told that this is because cruise ships are not equipped to detect and avoid icebergs at close range, as such they study satellite imagery and intentionally choose iceberg free regions to cruise. So while this does give you a feeling of safety, the adventerous part in you will end up feeling a tad disappointed.

The first and only stop that we made - after crossing the Arctic circle - was in Honningsvåg. This place really gives you the "end of the world" kind of feeling. This is also the port from where you can drive to the North Cape - 71°10′21″N - which is also the 'Northern most point in Europe'. 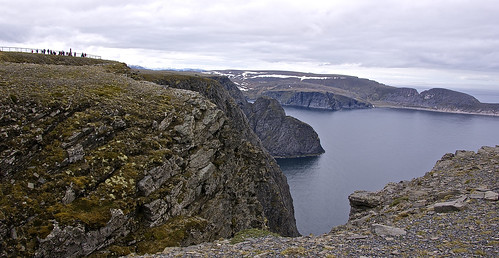 The drive from the port to the North Cape is equally stunning - where you get to enjoy natural beauty without the usual crowdedness of touristic spots. In fact, you can hardly see anyone around. 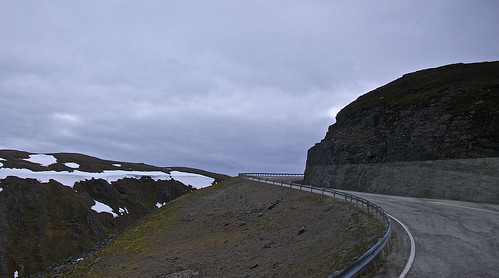 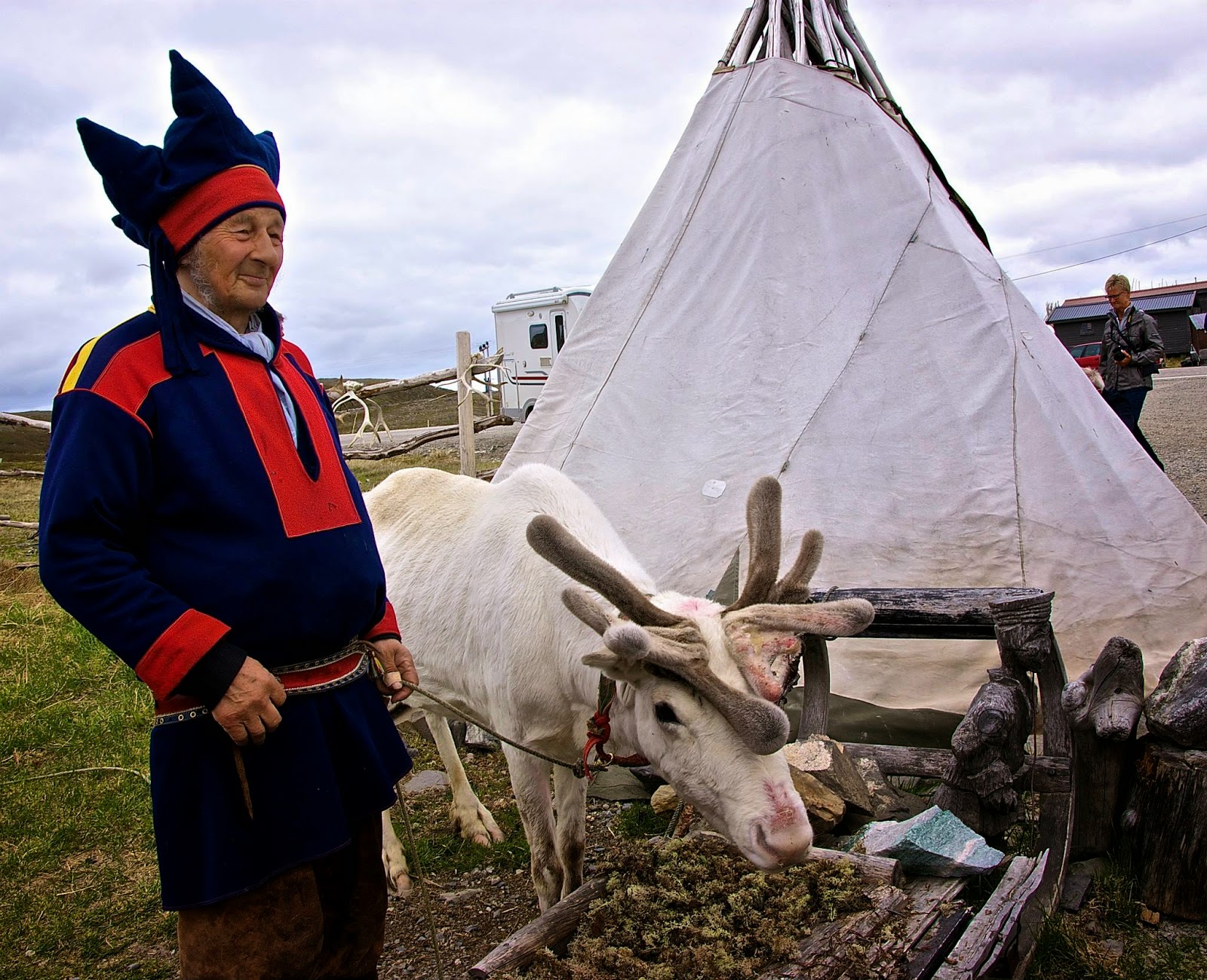 
Olden is another hidden gem - with plenty of lakes and mountains all around. 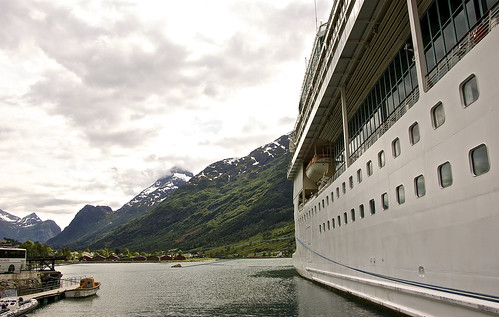 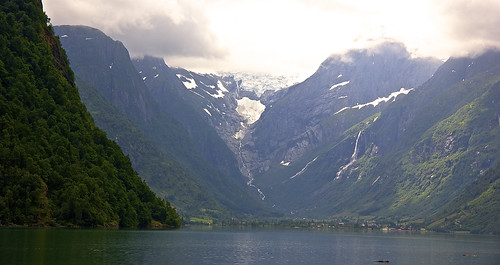 While the Briksdal glacier is "easily" accessible, you still need to walk / hike for around 1.30 hrs over hilly areas from the bus stop to reach the glacier. The area is not too steep or narrow, so it is mainly stamina that you will need to reach the glacier - do not forget to have water / drinks with you. There are also (golf ground type) mini-cars available for people with walking difficulties. However, we would still recommend walking to the glacier as much as you can - as the path leading to the glacier is equally beautiful. 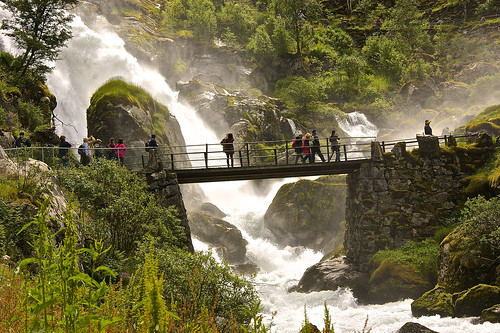 Of course, when you finally reach the glacier, the beautiful sight surrounding you makes you forget all the hard work that you put in to reach there. 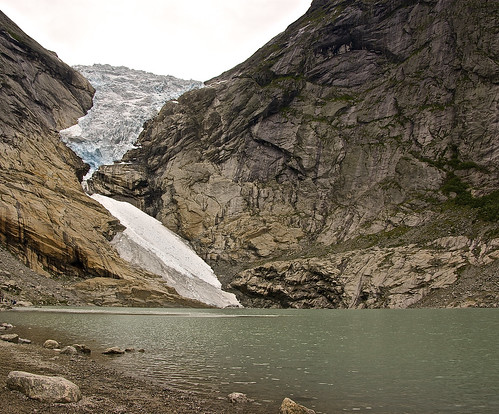 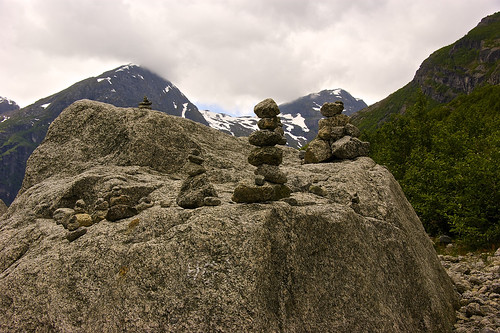 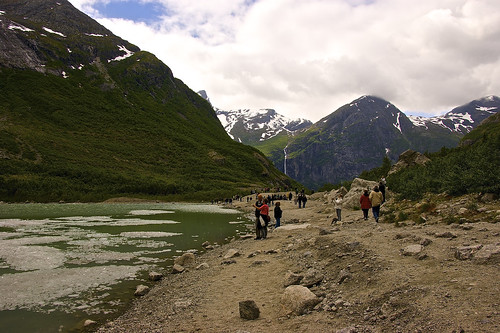 
Tromsø is a much larger city, esp. as compared to some of our other stops on the tour. As our tour guide informed us, it is the home to everything "northern most", so e.g. it has world northernmost cathedral (below), the world's northernmost university, and we hope you get the picture :) It is also a place of extreme weather phenomenon, so while you have the 'Midnight sun' for around 3 months; the rest of the year is spent in "darkness". As can be expected, people here are very happy when the sun does come up - which almost seems like a holiday (reason to celebrate). In the winter, of course, it is a good place to view the Northern Lights - so it does see a lot of tourists in winter just to see the Northern Lights. 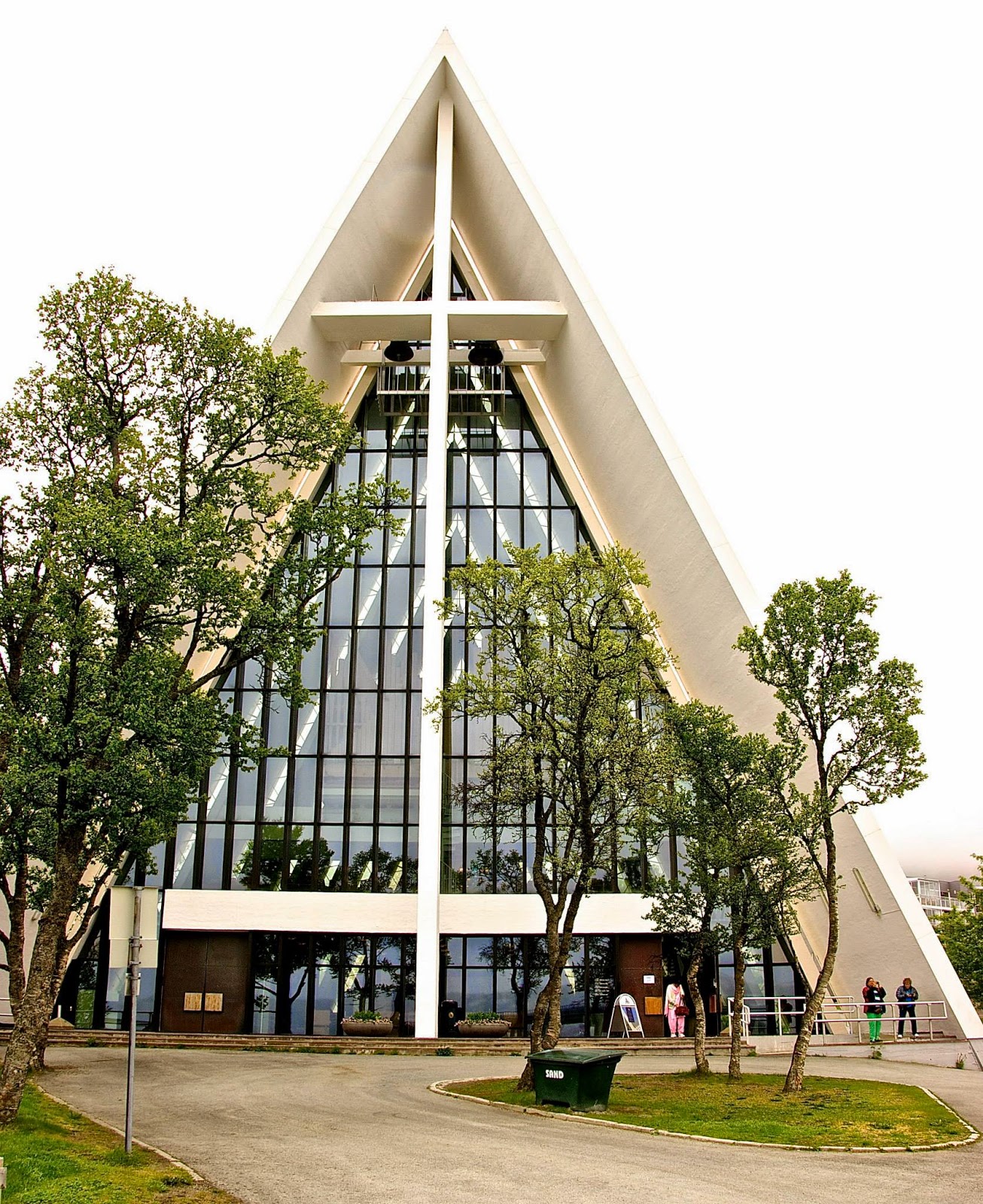 There is a cable car that you can take to the top of  Mount Storsteinen. 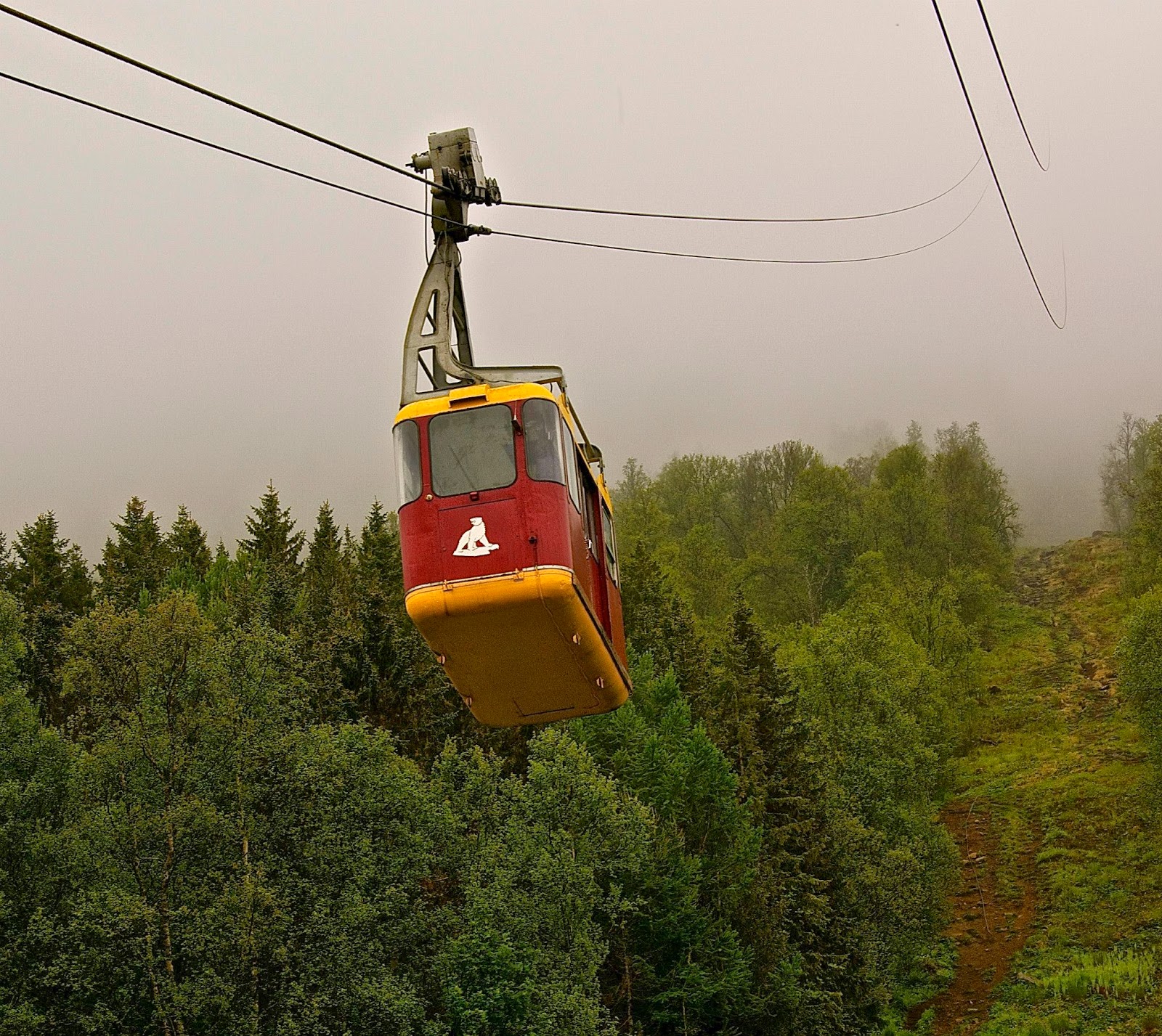 Unfortunately, the day we visited Tromsø, it was rainy and very foggy - as such we could hardly see anything from the top: however we still managed to take a few panoramic shots of Tromsø from above. 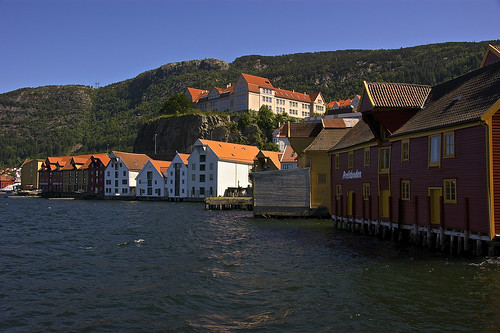 Our final stop was in Bergen. Bergen is a relatively large city - in fact one of the largest in Norway. So there is much more to do here than just sightseeing - including shopping, visiting the local market, and enjoying the local cuisine. The local food, as can be expected, consists primarily of sea food. For instance, we saw some 4-5 different varieties of just Salmon at lunch buffet. For Indians, esp. the vegetarian ones, the options are limited - as unfortunately in most of Europe. So, be prepared for that. The good thing is that you can at least find the fast food options here, e.g. McDonald - of course, this might also be a challenge in the smaller cities, e.g. Honningsvåg. 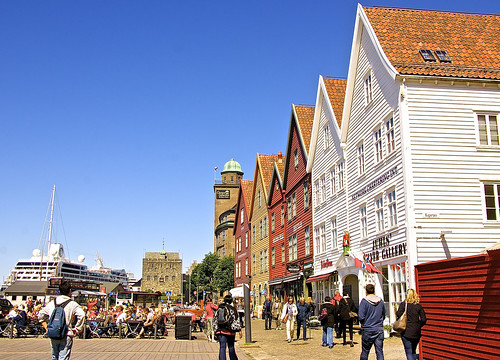 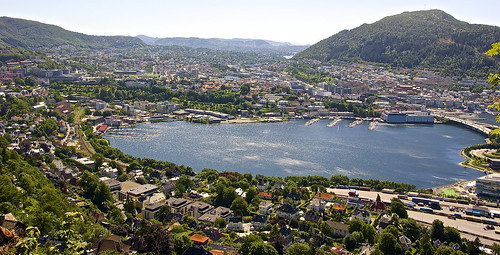