Bulgaria is a country in transition. The communist ruins are evident everywhere in the main cities. Dwelling a bit on the history lessons we received during our tours, it is easy to understand the 'Communist' link. Around 15-20000 Russian soldiers laid down their lives to help Bulgaria gain freedom from the Ottoman empire. So naturally Bulgarians feel indebted towards the Russians and relation with neighboring Turkey are tense.

Coming back to the present, Bulgaria is really trying to come out of its Communist past. Nowhere is it more evident than the stunning beaches, with rich tourists and their sports cars. The beaches are naturally beautiful, the restaurants wonderful, and the resorts welcoming. More on the beaches to follow later.

The tourism here is still very underdeveloped. The same can be said for foreign investment as well. As a result, even the capital Sofia is not 'frequently' connected with the rest of the world. There are very few direct flights. Your best bet is to probably transit via Vienna or Budapest. There are also trains to Istanbul, but beware of long queues at the border.

VISA wise, Bulgaria is not officially in Schengen. But Bulgaria has unilaterally decided to honor the Schengen treaty. What this means is that if you are Indian citizen, and possess either a Schengen VISA or residence permit of one Schengen countries, you do not need a VISA to visit Bulgaria for tourism.

Within Bulgaria, to reach the beaches, you will need to travel to a city named Varna. Varna is connected to few European countries, e.g. UK, Spain, Hungary, Poland. There are also local flights connecting Sofia to Varna, though again not very frequently. The flights take around an hour. There are also trains connecting Sofia to Varna. The good thing is that the trains might remind you of the usual passenger trains in India - so the trains are nowhere close to e.g. the fast French TGV trains. They take around 7-8 hours, and the only reason you might still want to take them is because of the cost and scenery. Varna is the 3rd largest city of Bulgaria. It is also referred to as the maritime capital due to its proximity to the Black Sea coast. As a result, it is the main port for industrial and cruise ships. In the past, it was alleged to be sort of the mafia capital of the country as well. But things seem to have changed since then and we found the city to be quite safe, to even venture out at night.

The city however is in dire need of some development. The main bus station, for instance, reminded us very much of the village bus stations in India. The other aspect similar to India is probably the taxi drivers, who never seem to go by the meter and charge whatever they think best. So keep this in mind and a good way to avoid this is probably to fix the rate with the taxi driver before getting into the taxi. Note however that most of the taxi drivers will not speak any English, so negotiating might be tricky. Taxis are of course very cheap here - as compared to western Europe - and is probably one of the reasons why the taxi drivers are out to con tourists.

A good place to stay in Varna is somewhere close to the Cathedral (below) - also the main attraction in the city. Then you will be close to the airport, train and bus stations. It is probably also the place where you will find restaurants / cafes open till late in the night. Hotel / restaurant staff usually do speak English and they usually have an English menu as well. 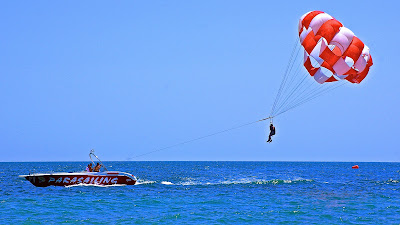 Varna does have a beach but it is quite small. If you are the beach type of tourist who enjoys spending the whole day at the beach and is interested in water-sports, you best bet is to head over to the nearby Golden Sands beach resort. The resort is 18km from Varna and there are frequent (usually hourly) buses connecting Varna - Golden Sands. You can of course also take the taxi, but as mentioned earlier, don't forget to fix the fare beforehand.

The Golden Sands beach is lush and long. The water also seemed just the right temperature for a dip - not too hot or cold. There are also options for quite a few activities such as jet skis, windsurfing, parasailing, etc. If you are not the active kind, massages on the beach also seem a popular activity here. 
The other beach resort worth visiting close to Varna is Albena. Albena is 40km from Varna, and basically in the same direction as Golden Sands. So the buses to Golden Sands usually continue to Albena. Taxis are of course also an option. If you are the adventerous type who usually like to try local foods at the places they visit - try something with corn here. Corn seems to be locally produced here. A traditional dish includes chicken filets, with mashed potatoes and grilled corn ('bhutta' as we know them in India).


Balchik is a small coastal village on the Black Sea coast - also reachable from Varna (21km). It is one of those scenic peaceful places where all you feel like doing the whole day is to sit at one of the cafes / bars and gaze at the sea. 
Mount Vitosha provides the ideal scenic background for Sofia. We also heard that there are many natural springs in the vicinity which provide the drinking water here - so no need to buy mineral water.

We unfortunately did not get to spend much time in Sofia. The absolute must-see attraction in Sofia is the St. Alexander Nevsky Cathedral. There are many small churches / museums close to the cathedral, so don't forget to check them out.

Unfortunately, tourism in Bulgaria is still very underdeveloped, and it is difficult to find information regarding available tours / events. It was only on going there that we learnt that an ancient Roman city has been uncovered under Sofia and that excavation is still going on. It is actually possible to visit the ruins, so don't miss out on the opportunity.

Finally, if you are interested in sampling out some traditional Bulgarian food with live folklore performance, we can recommend the Chevermeto restaurant. The prices are affordable, the food sumptuous, and the performances great (usually between 9-10pm) every evening. 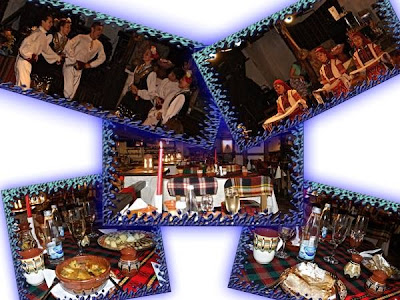