Chamonix is a picturesque French city in the foot of Mont-Blanc - the highest mountain peak in the Alps. It is also close to other mountain peaks, such as Aiguille du Midi. We visited Chamonix in Summer 2013. 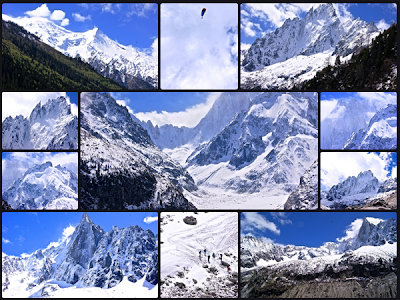 
Chamonix is located very close to Switzerland, almost on the border. So it can be a good midway stop if you are on your way from France to Switzerland, or vice versa. It can be easily reached by train or bus form major cities like Geneva / Lyon. If traveling by train, be sure to check real-time info as there are often upgrades / repairs going on in the lines, and you might have to make part of the journey by bus. Some useful links below:

Both buses and trains usually arrive at Chamonix gare (train station in French). The gare is also the best place to stay in the city and it is both close to the main city hub (where most of the restaurants / shops) are located, and is also close to the lifts (cable cars) that take you to the different mountain peaks.

It is actually very close to Italy as well, though a cable or cross country skiing will be your only options to cross over here :)


The city is like one of those places that was  destined to be a holiday spot, and it serves this purpose very well. Everywhere you look, there are people enjoying, children playing, and absolutely stunning scenery - massive mountain peaks engulfed in clouds. 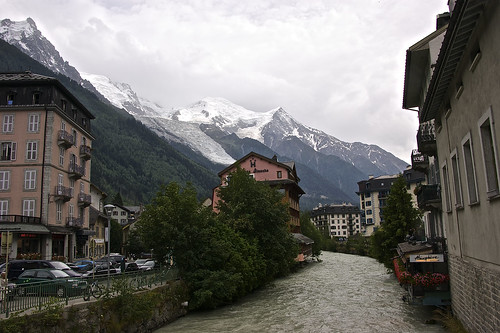 The city itself is very small and you can easily cover most of it by walking. Though almost the size of a village, Chamonix has all modern amenities from ATMs to grocery stores to a wide variety of restaurants. Most of the shops are open till late - 8pm and the restaurants till (almost) midnight. The best part is that almost all the shopkeepers speak English, which basically goes to show the International crowd visiting Chamonix. This also means that things here are in general more expensive than normal French cities e.g. Lyon, but still cheaper than Switzerland. 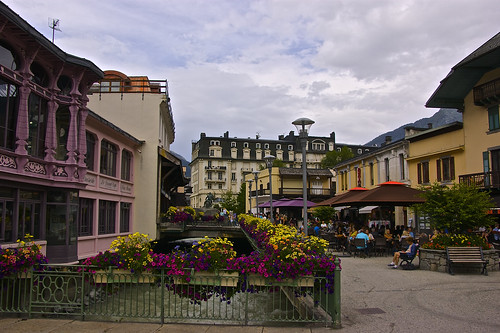 We were pleasantly surprised to find even an Indian restaurant here: Annapurna. We were initially a bit reluctant to visit the restaurant as we thought that it would basically be one of those exploiting the Indian name to cater to an European clientele (How else do you explain item like horse / beef curry in some of the Indian restaurants here?) But we were impressed by the variety / quality of food at Annapurna, and can definitely recommend it. There were actually a lot of Indian tourists here which probably explains how an Indian restaurant can survive here for so long (since 1993).

The city looks equally beautiful at night. Some pics below: 
There are many things to do and explore in Chamonix, irrespective of whether you are visiting Chamonix in Summer / Winter. Some of the common activities include skiing, hiking, paragliding, etc.

If you are only visiting for a couple of days - like we did - the absolute must see attractions include visiting Mont-Blanc / Aiguille du Midi peaks and the Mer de Glace glacier (the largest glacier in France). Of course, in both cases, the plan is to visit them by cable car and not really hike up there. The good thing about the cable cars is that they easily take you to heights of 2000/ 3000m, and allow normal people like us to experience the wonders of such high altitudes, without the daredevilry required to climb such high altitudes.

From Aiguille du Midi, there is also a cable car that takes you to Helbronner on the Italian side. Unfortunately, this part was closed when we visited. In general, the cable cars are often not running due to high winds / bad weather conditions. So it is good to have a look at the extended weather forecast before heading up there. You can find real-time updates regarding the lift operation here: Aiguille du Midi lift (real-time info)


The Montenvers railway track takes you to the the largest glacier in France: Mer de Glace. Note that trains to Montenvers depart Chamonix, from a small railway station, located right behind the main SNCF gare.

The train takes you to Montenvers in approximately 15min. From Montenvers, you can either take a cable car or hike to reach the Ice Cave located at the bottom of the glacier. Note that You will have to climb approx 200-300 steps to reach the bottom even if you take the cable car - so it might not be suitable for senior people. The Ice Cave (pic below) is quite spectacular,  so it is definitely worth the hard work :)

Posted by Soma Biswas at 2:45 AM No comments: